The Washington Post reports that an Indian magician has drowned while attempting a "Houdini-inspired" escape from locks and chains in the Hooghly River in West Bengal. Chanchal Lahiri, whose stage name was Jadugar Mandrake, failed to surface. His body was later found a half mile from where he performed the stunt.

"He was a great stunt artist and this is a big loss for the Indian magic community," said Madan Bharti, a historian of Indian magic. 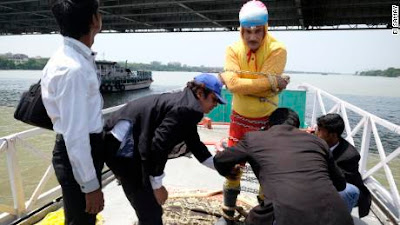