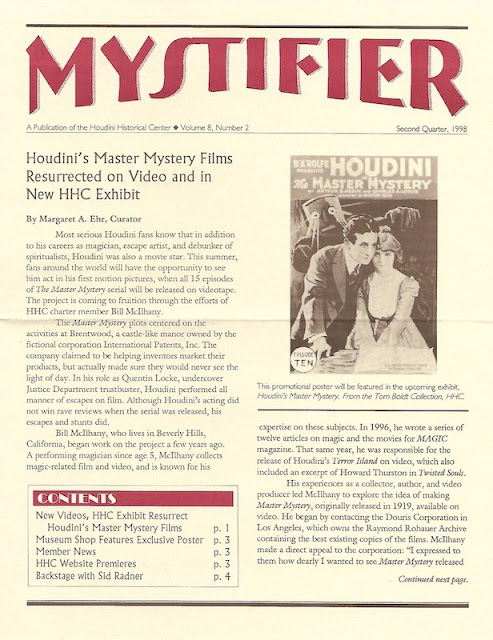 The Second Quarter 1998 Mystifier kicks off with the news that The Master Mystery will be released on VHS for the first time, and that the HHC will have a special exhibit devoted to the film called Houdini's Master Mystery. Curator Margaret Ehr explains how the VHS project was spearheaded by HHC charter member Bill McIlhany:

His experience as a collector, author, and video producer led McIlhany to explore the idea of making Master Mystery, originally released in 1919 [sic], available on video. He began by contacting the Douris Corporation in Los Angeles, which owns the best existing copies of the films. McIlhany made a direct appeal to the corporation: "I expressed to them how dearly I wanted to see Master Mystery released on video, challenged them to to do it or have a video publisher do it, or I would like to do it." With Douris' permission, McIlhany began work in earnest in early 1997.


The newsletter continues with the museum shop announcing they now have a reproduction of Houdini's 1913 Hull Palace playbill depicting the Water Torture Cell. Also that the sale of their exclusive phone cards is extended to the end of the year. The newsletter announces the launch of the HHC's official Houdini website at www.foxvalleyhistory.org/houdini (no longer active.) Among the New Members is the familiar name of Joseph Hanosek.

Sid Radner devotes most of his "Backstage" column to debunking the idea that Houdini left no money to Bess after his death. Sid cites the various life insurance policies Houdini had taken out totaling $160,000.

In 1926, $160,000 was a lot of money. Many young workers dreamed of earning $5000 per year in those days. Mrs. Houdini was, unfortunately, a bad money manager and became the victim of many bad investments and unscrupulous people.


Sid then announces that HHC board member Dr. Morris Young recently received honors for a donation of rare books on mnemonics to the government of San Marino. He also teases: "There is much activity concerning Houdini in television and movies–more about this in the next issue."