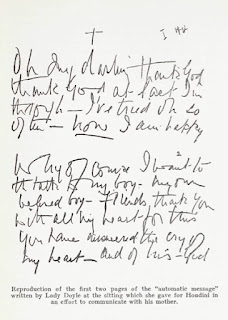 It was 97 years ago today on June 18, 1922, that one of most famous seances of all time took place at the Ambassador Hotel in Atlantic City.

Sir Arthur Conan Doyle had invited Harry and Bess Houdini to join his family for a weekend vacation. The Houdinis arrived on Saturday and took a suite beside the Doyles in the Ambassador. While on the beach the following day, Sir Arthur told Houdini that Lady Doyle would like to give him a seance in which she would attempt to contact his mother. It was requested Bess not attend as "two people of the same mind" might inhibit the spirits.

Lady Doyle's preferred method of spirit communication was "automatic writing", in which she sat with paper and pencil and quickly transcribed the words of the spirit. Below is the full text of Mama's message from the Great Beyond. The cross at the top of the page, Sir Arthur later explained, was made by Lady Doyle, not the Jewish Mrs. Weiss, to "guard against lower influences."

"Oh, my darling, thank God, thank God, at last I'm through— I've tried, oh so often—now I am happy. Why, of course, I want to talk to my boy—my own beloved boy— Friends, thank you, with all my heart for this.

You have answered the cry of my heart—and of his— God bless him—a thousand fold, for all his life for me—never had a mother such a son—tell him not to grieve, soon he'll get all the evidence he is so anxious for—Yes, we know—tell him I want him to try to write in his own home. It will be far better so.

I will work with him—he is so, so dear to me—I am preparing so sweet a home for him which one day in God's good time he will come to—it is one of my great joys pre- paring it for our future—

I am so happy in this life—it is so full and joyous— my only shadow has been that my beloved one hasn't known how often I have been with him all the while, all the while— here away from my heart's darling—combining my work thus in this life of mine.

It is so different over here, so much larger and bigger and more beautiful—so lofty—all sweetness around one— nothing that hurts and we see our beloved ones on earth— that is such a joy and comfort to us— Tell him I love him more than ever—the years only increase it—and his goodness fills my soul with gladness and thankfulness. Oh, just this, it is me. I want him only to know that—that—I have bridged the gulf—That is what I wanted, oh so much—Now I can rest in peace— How soon—"


At this point Sir Arthur interrupted and asked Houdini if he would like to ask his mother a question. Normally Houdini would ask something only his mother would know, but he "purposely evaded asking anything which might embarrass the medium" and instead went with a question suggested by Sir Arthur, "Can my mother read my mind?"

"I always read my beloved son's mind—his dear mind—there is so much I want to say to him—but—I am almost overwhelmed by this joy of talking to him once more—it is almost too much to get through—the joy of it—thank you, thank you, thank you, friend, with all my heart for what you have done for me this day—God bless you, too, Sir Arthur, for what you are doing for us—for us over here—who so need to get in touch with our beloved ones on the earth plane—

If only the world knew this great truth—how different —life would be for men and women— Go on, let nothing stop you—great will be your reward hereafter—Goodbye —I brought you, Sir Arthur, and my darling son together— I felt you were the one man who might help us to pierce the veil—and I was right— Bless him, bless him, bless him, I say from the depths of my soul—he fills my heart and later we shall be together—oh, so happy—a happiness awaits him that he has never dreamed of—tell him I am with him— just tell him that I'll soon make him know how close I am all the while—his eyes will soon be opened—Goodbye again—God's blessing be on you all—"


Houdini thanked the Doyles for the seance, but kept his true thoughts to himself. The Doyles believed he was "greatly moved" by the experience. But as Houdini continued to denounce spiritualism, Doyle wrote and asked how he could continue his campaign after he had been given proof of spirit communication by his own mother? On December 15, 1922, Houdini finally wrote to Sir Arthur:

"I know you are honorable and sincere, and think I owe you an explanation regarding the letter I received through the hands of Lady Doyle.

I was heartily in accord and sympathy at that seance, but the letter was written entirely in English, and my sainted mother could not read, write or speak the English language. I did not care to discuss it at the time because my emotions, in trying to sense the presence of my mother, if there was such a thing possible, kept me quiet until time passed and I could give it the proper deduction.

I trust my clearing up the seance from my point of view is satisfactory, and that you do not harbor any ill feeling, because I hold both Lady Doyle and yourself in the highest esteem. I know you treat this as a religion, but personally I cannot do so for, up to the present time, and with all my experiences, I have never seen or heard anything that could really convert me."


While Houdini would continue to cite the language as the reason he rejected the message, I believe this was just another way for him to spare the Doyles. Reading the message in full, one can't help but see what Houdini must have seen on that day. It's transparently bogus. Gresham describes it as "precisely what the subconscious mind of a well-brought-up Englishwoman of the upper middle class would write if she subconsciously wanted to console a bereaved son." The message lacks any evidentiary specifics, and its endorsement of the Doyles and request that Houdini attempt his own communication feels decidedly manipulative.

The real mystery remains the Doyles themselves. Were they out and out frauds? Was Sir Arthur being duped by Lady Doyle? Or were they both so swept up in religious devotion that they truly believed they possessed supernatural powers?


The Atlantic City seance has been dramatized on stage and screen many times. Most depict it as ending the friendship of Houdini and Conan Doyle on the spot. But this was not the case. While the seance remained a sore spot, the men kept in contact until the publication of Houdini's A Magician Among the Spirits in early 1924, at which point Doyle severed communication.

The site of the seance, the Ambassador Hotel, remained in business until the 1970s. In 1978, Ramada purchased the derelict building and reused the steel framework for a new development. It was expanded in 1988. Many more owners and more expansions followed. Today the location of Mama's earthly touchdown sits somewhere within the sprawling Tropicana Casino & Resort Atlantic City.


Additional Note: On December 19, 1922, Houdini wrote and had witnessed an official statement: THE TRUTH REGARDING SPIRITUALISTIC SEANCE GIVEN TO HOUDINI BY LADY DOYLE. In it he misdates the seance as taking place on June 17. Therefore, many Houdini biographies list this as the date. However, Houdini's own detailed notes clearly show that the seance took place on Sunday, June 18, and that is the date most current biographies now cite.