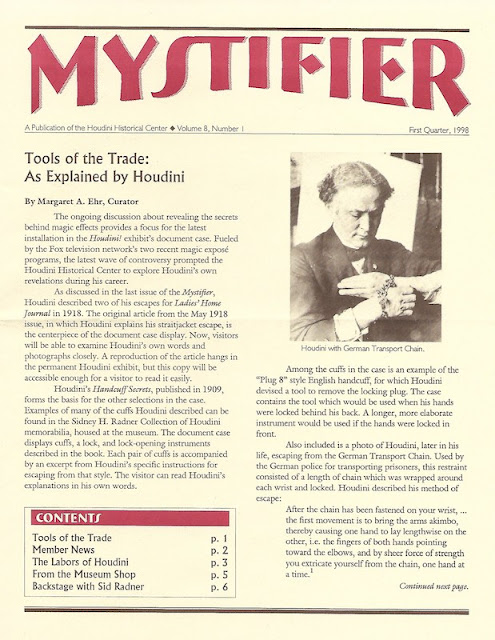 The controversial "Masked Magician" television specials continued to stir up the magic world at the start of 1998. This inspired the HHC to create a special display, as curator Margaret Ehr explains in the First Quarter Mystifier:

The ongoing discussion about revealing the secrets behind magic effects provides a focus for the latest installation in the Houdini exhibit's document case. Fueled by the Fox television network's two recent magic expose programs, the latest wave of controversy prompted the Houdini Historical Center to explore Houdini's own revelations during his career.


The display includes Houdini's Ladies Home Journal article on "How I Get Out of A Strait-Jacket" as well as excerpts from his book Handcuff Secrets beside various shackles. While the display sounds interesting, eventually Sid Radner and the HHC would have a falling out over exposure displays. One wonders if the seeds of that conflict were first planted here?

Speaking of handcuffs, this newsletter contains a true gem. It's a very well researched article by Mark Lundblad and Bill Liles that dissects Houdini's famous 1906 "Europe's Eclipsing Sensation" poster, identifying the various makes of handcuffs depicted on it. 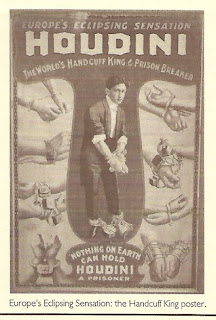 The images included in the "Handcuff King" poster range from a very simple, single handcuff (Left 1) to a complex combination of multiple handcuffs (Left 3, Right 2 and Right 4). These cuffs may have been selected just for an appealing artistic balance or for other reasons. Perhaps Houdini intended this poster to be not only a sensational advertisement for upcoming performances, but also a personal commemoration of events from the many stages of his long and varied career.


The newsletter continues with the museum shop announcing it now has straitjackets in stock. (!) There's the announcement that Sidney Radner will give a lecture about "Jeanette Chapman: Houdini's Undercover Girl" on April 27. Chapman worked with Houdini in 1925 as one of his spiritualist agents. Intriguingly, it says the lecture will include an 18 minute video interview with Chapman. I've never seen this video, but I would love to share it here!

Sid kicks off his "Backstage" column by noting that a clip from The Man From Beyond was shown on the Academy Awards during a segment celebrating 70 years of special effects. He also reveals that a new Houdini biopic will be produced by cable network TNT starring Johnathon Schaech. This bit of news, Sid notes, was sent in by John Cox "who always forwards Houdini news from Variety and other entertainment publications." Indeed I did!

Sid then announces that in the next issue of the Mystifier he will expose a man who calls himself "Harry Houdini Hardeen." The man is not a member of the family and is using a social security number of a deceased family member. "Let Houdini fans and historians be warned," says Sid. This would not appear in the following issue, nor do I recall it ever appearing. But I believe I encountered this character still working his con at the Houdini Walk of Fame Star ceremony in 2008.

Sid concludes with the "scoop" that Tom Thayer of Universal is planning to produce a movie about Houdini and Margery from a script by Edithe Swenson with "some very interesting new material involved." This project never surfaced, but I've met Tom and he still aspires to make his Houdini/Margery movie.

Contents:
Tools of the Trade
Member News
The Labors of Houdini
From the Museum Shop
Backstage with Sid Radner