It took Hollywood 30 years to make the first Houdini biopic. But this was not for a lack of effort. The idea for a Houdini movie travelled from RKO to Columbia to Paramount to David O' Selznick and then back to Paramount. However, there was another stop on this journey that has been largely forgotten. 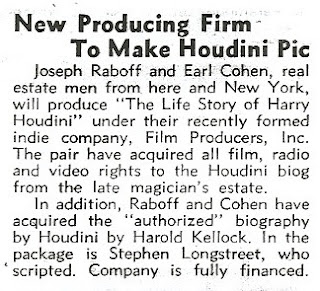 In 1950 a former drug store operator, Joseph Raboff, and a real estate man, Earl Cohen, formed a company called, Film Producers, Inc. They acquired the film, radio, and TV rights to Houdini, reportedly "from the late magician's estate." It's unclear who that would be in 1950, but their rights included the Kellock book, so possibly the estate of Bernard Ernst.

Teaming with a former Paramount executive, Endre Bohem, the producers commissioned a screenplay by Stephen Longstreet (The Jolsen Story

) and announced production of The Life Story of Harry Houdini for October 1950. The project would star either John Garfield or Lee Cobb in the lead role. There was also talk of a half-hour TV series following the film's release, which might be the most intriguing part of all this. What would a Houdini TV series have looked like in 1950?

It's unclear what happened to Film Producers, Inc. ambitious project, but it's likely the Raboff and Cohen realized they had bitten off more than they could chew. The Longstreet script, as far as I know, has never surfaced.

In September 1951, Paramount reacquired the rights to the Kellock book from Cohen and Raboff when producer George Pal expressed interest in doing a Houdini movie. This time the result was the classic Houdini with Tony Curtis and Janet Leigh in 1953. The idea of a Houdini TV series would have to wait until 2016 with Houdini & Doyle.