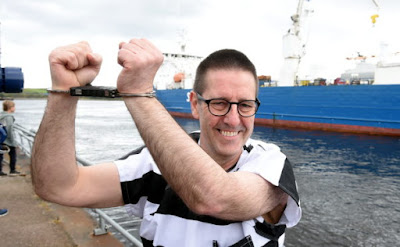 Magician and escape artist Dave Goulding freed himself from handcuffs and a padlocked sack on Waterloo Quay in Aberdeen Harbour on Sunday. Dave did the stunt just 200 meters from where Houdini himself leapt handcuffed into the harbor in 1909.

Modern health and safety rules prevented Goulding from exactly recreating Houdini's feat. "The safety concerns of the lifeboat crew and others meant I could not go in the water," said Goulding, "But it was yucky looking, so I was reasonably pleased about that."

Even in Houdini's day authorities attempted to halt his stunt due to weather and poor conditions in the harbor. Unwilling to disappoint the large crowd that had gathered, Houdini chartered a tug and performed the escape in the rough seas anyway.

Goulding performed his stunt as part of the RNLI lifeboat station's open day and to promote the Aberdeen Magical Society show, Harbour Sleights, planned for The Tivoli Theatre on August 30. All money raised will go to support the work of the Aberdeen lifeboat crew.