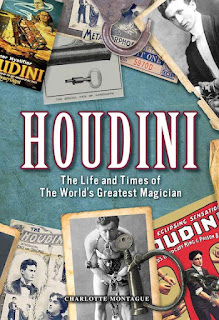 A new edition of Houdini: The Life and Times of the World's Greatest Magician by Charlotte Montague has been released by Chartwell Books. While the book's content is the same as the 2017 hardcover, it spots a nice new cover design and new end pages. My copy arrived without a dust jacket, so presumably this is a jacket free edition, which is another difference from the 2017 book.

This reminds me of the Houdini coffee table books of the 1970s. It's heavily illustrated and nicely laid out in an encyclopedia-like style. Some mythology and inaccuracies do creep in (Bells of the Kremlin, "Ralph" Hodgson), but overall it's well researched and a good reference book.

Purchase the new Houdini: The Life and Times of the World's Greatest Magician from Amazon.com and Amazon.co.uk.