A Master Mystery revelation at UCLA 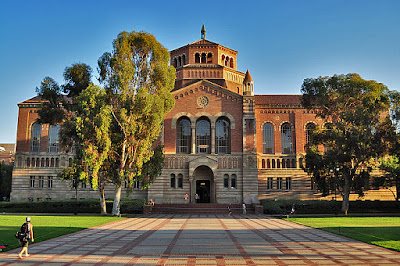 Two weeks ago, Joe Notaro and I met at the beautiful Powell Library on the UCLA campus. We were there for, what else, Houdini! Now, I've long known that the UCLA Film & Television Archive has a copy of The Master Mystery that is (almost) complete. But for whatever insane reason, I've not made the time to go watch it. Joe has made the time and has done some great work identifying the differences in the various available versions. So if you want to get into the details, check out Joe's blog. What I'm going to do here is share what I saw in general, and explain what a revelation it was!

For starters, August 17, 2018, was the first time I ever saw The Master Mystery. Yes, I have the Bill McIlhany VHS and the Kino DVD (both made from a print in the Raymond Rohauer Archive licensed by the Douris Corporation), and I've watched those many, MANY times. But I now realize what I was watching was not The Master Mystery at all. That is a severely truncated version of the serial that dramatically alters the structure, story, and even the spirit of what was shown to audiences in 1918 and 1919. At least that's true of the first 6 episodes, which is what I'm going to focus on here.

To set the scene, Joe arranged for us a private room with a desk and table inside the UCLA Media Lab, which is a great way to watch and study the movie. Research copies are made available on VHS, which the student staff load into a bank of players that feed the individual stations and rooms. Here you have the ability to fast forward, pause, etc., and we did a lot of that!

I already blogged about the incredible newsreel footage from Houdini's 1913 Success challenge, which is what we watched first. But then it was Master Mystery time.

Episode One is largely the same as what one sees on Kino, apart from a few additional title cards (which Joe has meticulously documented). Episode One is a pleasure to watch with a nice handcuff escape at the midpoint and rousing action that culminates with an unconscious Houdini (as Quentin Locke) being strapped into a straitjacket. That's where the cliffhanger ending occurs. 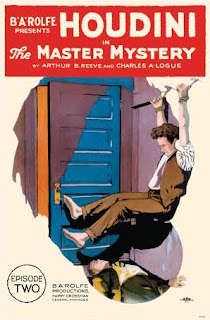 Episode 2 picks up with the conclusion of the straitjacket escape, and here's where the UCLA version begins to diverge from the commercially available versions. On Kino, Episode 2 ends with Houdini tied to the coat rack. It's an abrupt cliffhanger and a bit of a letdown as it's the first escape in that episode. But maybe that was the nature of these old serials, right? Get you where you want to be and then..."To Be Continued Next Week." This is what I've always thought, and it turns out I've been dead wrong!

In the UCLA version (the real film), the coat rack escape plays out in full in the middle of the episode. It was never a cliffhanger. In fact, this establishes the structure of what is to follow. There are three major escapes or action sequences per episode, which makes for a very different viewing experience and a heck of a lot of fun! Episode 2 continues all the way to the Bakers Dock sequence and cliffhangs (is that a term? -- it is now!) with a bound Houdini and a thug falling into the water. It was at this point I turned to Joe and said, "This is a completely different movie!" Joe's answer, "Just wait."

The next four episodes--and that's more than an hour worth of movie--are entirely new. (Only a few fragments of the Bakers Dock sequence show up in Kino.) And it's not just new escapes. There are whole plot-lines that makes The Master Mystery work story-wise in a way that it just doesn't on Kino. Again, if you want the scene by scene breakdown, check out Joe's blog. But among the things we see right away are both underwater escapes at Bakers Dock play out in full. Seeing Houdini escaping ropes and chains underwater is a beautiful thing to behold. 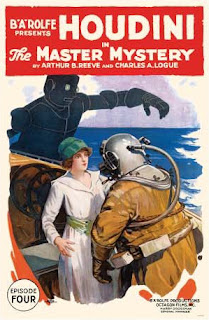 The Acid Vat escape, a fragment of which is only available as a extra on Kino, plays out at the end of Episode 3 and is wonderfully suspenseful as it intercuts Marguerite Marsh's Eva approaching the cabin and reaching for the doorknob, which we know will dunk Harry into the acid. So much fun. So too is the sequence in which Houdini is tied inside a rooftop water tank with the spigots turned on full. This is the escape I was most looking forward to seeing on this day, and I was not disappointed. It's spectacular! But, surprisingly, it was not the escape that left the deepest impression.

That happens at the midpoint of Episode 3 when Houdini is locked inside a jail cell. There is a magnificent closeup of Houdini at the bars as he turns his intense gaze to the lock. In another closeup, the faceplate on the lock disappears and we are suddenly able to see inside the mechanism as the gears begin to unlock by some invisible force. It's a wonderfully creative way to show the escape, and there isn't anything like it in any other Houdini movie. It knocked me out.

I should stop here to say that the great Patrick Culliton saw the complete Master Mystery projected many years ago at The Silent Movie Theater in Los Angeles. Not only does he remember the three escapes per episode, but he also always mentions this jail escape. It has remained vivid in his mind for decades. Now I understand why!

Episode 4 is also a stunner, and it has an important connection to Houdini history. At the midpoint of the episode, Locke and Eva travel out on a lake to test a special diving suit. The Automaton and his collection of thugs pursue them in their own boat. (The idea of the Automaton as the leader of the gang is made much clearer in the complete version.) This is all filmed on an actual body of water, and seeing the Automaton on a skiff is wild stuff. But what's most exciting is we get to see Houdini escape from his diving suit underwater, separating it at the waist using the "quick release" mechanism of his real-world patent. Fantastic. 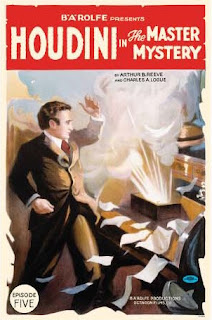 Characters are also introduced and developed in these episodes in important ways. Ruth Stonehouse is far better developed and is clearly featured. So to is Edna Dixon as Deluxe Dora. A great sequence is when Houdini visits Dora's luxury boudoir apartment. Here he rummages through her roll-top desk until a booby trapped box explodes in his face, blowing him back over a chair. It's a stunt Houdini clearly does himself. (It's depicted on the Episode 5 poster.) And speaking of explosions, Episode 5 into 6 features a fantastic ticking bomb sequence. When the bomb goes off, it flattens Houdini under a doorway and blows the Automaton out into the street. Yes, the Automaton is "killed" as part of the story. But when Locke and Eva later sneak into a dark lab to examine his remains, laying Frankenstein-like on a table... "It's alive!"

Episode 7 is where the UCLA version and Kino join back up. The UCLA print is missing Episodes 8 and 10 (which are available on Kino). Episode 11 is missing from Kino, but available in full at UCLA. Episodes 12-15 are the same in both. I should also note there is very little film damage visible in the original UCLA source.

What aren't so pristine are the Media Lab's current viewing copies. Time is taking its toll on these. In fact, while we were watching, the machine started eating the first tape! As you might imagine, Joe and I freaked out. Were we watching Houdini history being devoured before our eyes? The second tape--the one that contains the new Episode 11--would not play at all (so I didn't get to see that episode). Joe had watched this tape in the past, so it appears it has only recently died.

Fortunately, the original 16mm film is safely stored in the UCLA vaults, and the very helpful staff said they would look into having fresh tapes made from the source. Unfortunately, they are not set up to make digital copies, which is what really needs to be done.

So why haven't we seen this version of The Master Mystery on DVD? Why can't we stitch this and the Rohauer/Douris print together and make the complete serial available for all?

I only spoke briefly with the helpful head of the department, Maya Smukler, so I don't have all the facts, but it's clear that UCLA is not able to license this as they can their other material. Why that is will have to be investigated. But let's hope there is some way to get this out there. Because everyone should see and enjoy The Master Mystery the way Houdini made it. The way I saw it on this memorable day at UCLA.

Thanks again to Joe Notaro for finally getting me to UCLA. Also thanks to Maya Smukler, Susan Tenenbaum, and the student volunteers who helped us out.