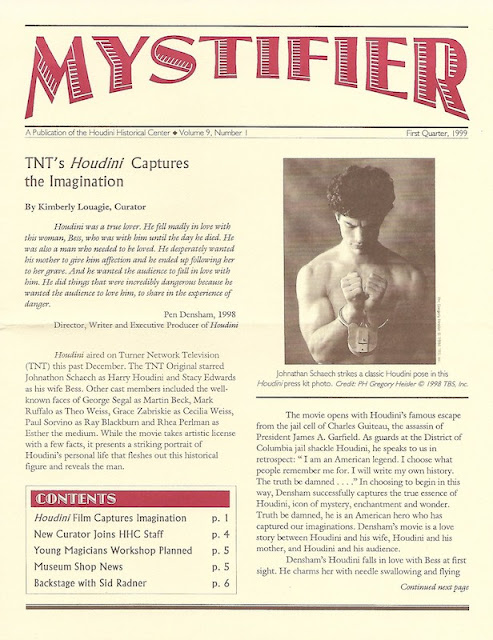 The Mystifier kicked off 1999 with a slight makeover of its masthead and a review of the TNT Houdini biopic by new curator Kimberly Louagie. It's less a review than a summary of the movie and a fact check of events. In the end, Louagie concludes:

The TNT original movie Houdini is well done. Many of the events ring true to life, such as his poverty stricken childhood, death defying escapes, anti-Spiritualist crusade and his untimely death. The depictions of these events seem so accurate that the less tangible things about his life become more real. Not much is known about Houdini's personal life because he left very little record of it. It is in this unknown world that Densham uses creative license and captures our imaginations.


Following the review is a lengthy article about Kimberly Louagie herself. It's then reported that the new HHC website is going strong with 12,400 hits since its creation on May 24, 1998. A Young Magicians workshop is announced for April. The museum shop announces a clearance sale, including their special Houdini phone cards marked down from $39.95 to just $5.00. New Members include familiar names George Ford, Scott McGraw, and Mark Schwartz.


Sid Radner begins his "Backstage" column by welcoming the new curator. He then announces that the Houdini musical, which premiered at the Goodspeed Opera House, will be moving to the Marriott Theater in Lincolnshire, Illinois, with a new actor in the role of Houdini. Sid, who had been a great champion of the production, now levels some criticism:

If you're looking for new facts about Houdini, of course, you won't find any in the production. You will get more of the fiction that each production seems to add to the historical confusion surrounding Houdini. In this musical, Houdini and Hardeen fight over Bess. Later in the production Houdini has an affair with–guess who–Margery.


Sid then offers a correction to the Marie Blood interview from the last issue, saying Houdini stood 5' 4", not 5' 7". (Actually, a 1926 physical puts his height at exactly 5' 5.276".) Sid notes the new musical Ragtime features Houdini as major character. He again urges members of the HHC to write the Post Office Board to request a Houdini stamp. This would become a personal crusade for Sid, which would ultimately succeed.

Sid closes with the news that he and Tom Boldt are exploring the idea of doing the Official Houdini Seance in London that year. This would be the first time the seance was held outside the United States. "Think about it," says Sid, "Wouldn't Houdini wish to return in his glory days in London?"