My Houdini letter and a 100 year mystery

Here is one of my first and most cherished Houdini collectibles; a letter he wrote exactly 100 years ago today. I got this around 1980 and it has hung framed on my wall(s) all these years. Today seemed like the right day to share it. 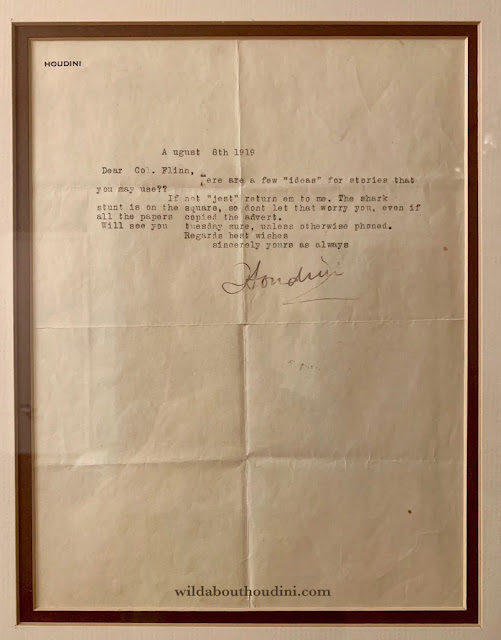 But this letter has also baffled me from the day I received it. Who was Col. Flinn? What was the "shark stunt" that was "on the square." And what does "on the square" even mean? And if "all the newspapers copied the advert", why have I never been able to find any of those ads or any mention of anything to do with Houdini and a shark in 1919?

In 1916 Houdini announced plans to fight a live shark, and this was picked up by the papers. But the demonstration never happened (thankfully). Could this somehow be referencing that? Might Houdini have been sending Flinn old newspaper clippings about past stunts? One pet theory I have is Flinn was the ghostwriter of his "Nearly Dying for a Living" article that appeared in the December 1919 Hearst’s, and this letter marks the genesis of that project. A theory.

One thing I do know is the timeline around when this was written. Houdini had just returned from Hollywood after filming The Grim Game. This was written during his first week back in New York. Houdini wrote this on Friday, August 8, and would have met with Flinn on Tuesday, August 12 (unless he was "otherwise phoned"). But apart from this, my chronology for these first three weeks of August are a blank. The next notable event was a private screening of The Grim Game the Famous Players-Lasky offices on August 18. The movie then opened on Broadway on August 25.

But this may not have had anything to with The Grim Game. Houdini always had a dozen projects going at once, so this could have been anything. The key, I believe, is finding out who Col. Flinn was.

So does anyone out there that has anything else that mentions Col. Flinn? It would be fun to finally solve this 100 year old mystery.