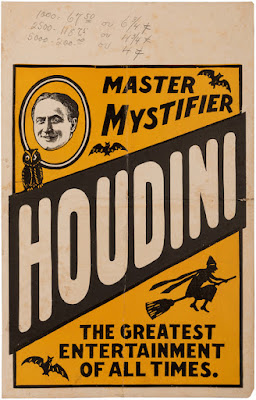 Today's Potter and Potter Online Magic Auction saw the sale of two interesting Houdini lots for reasonable prices. First up was an original window card for Houdini's "3 Shows in One" which went for $2,200 on a $1,500 - $2,500 estimate.

I've always been intrigued by this particular poster artwork, which was used by Houdini during his final tour in 1926. The style is a dramatic departure from his other posters, and his use of Halloween iconography--witches, bats, owls--is eerily prescient. Of course, this tour would end with his sudden death on Halloween.

The second lot was a "Production Birdcage and Growth of Flowers Table" said to have belonged to Houdini and later Hardeen (certified by Sid Radner). This was likely used in Houdini's "3 Shows in One", so it makes a nice companion to the poster. The colors even match! It sold for $3000, also on a $1,500 - $2,500 estimate. 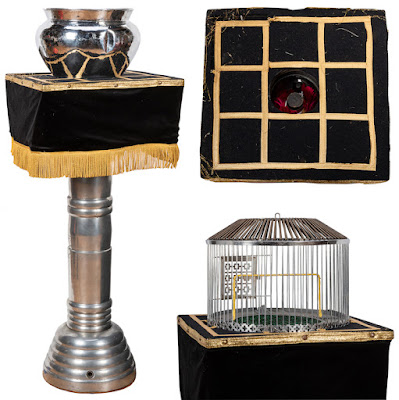 The auction description explains in detail the table's workings, revealing the type of highly mechanical magic Houdini seemed to enjoy. But whenever I see something like this, I can't help but think of the quote by Chicago magician Vic Torsberg: "Houdini's magic was just a bunch of junk. You know, that push-button German crap. That's what he performed."

Below are links to some more examples of Houdini's eerie "Halloween" style 3 Shows in One poster.