"Dr." Hardeen is in the house

There's a lot to like about this clipping from the November 16, 1926 Boston Globe. First and foremost, this is a pic of Hardeen that I've never seen before. It's also interesting and uncommon to see his real first name, "Franz", here appearing as his middle name. But "DR."? 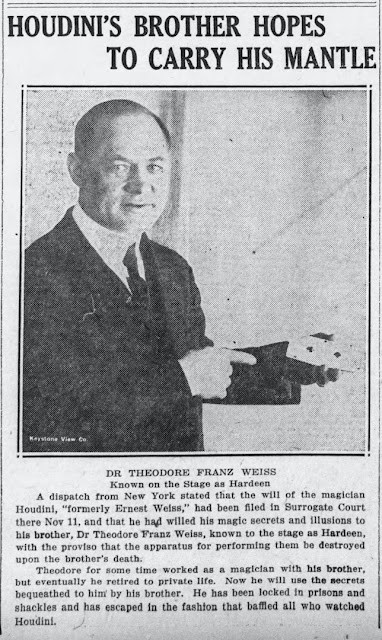 Before we go in search of Dash's long lost medical license, I think we might just assume this reporter was a sloppy note taker. You'll notice he says Houdini's real name was "Ernest Weiss", likely confusing Harry's name with that of his lawyer, Bernard Ernest.

This is one of the earliest articles announcing Hardeen's return to show business and his taking up the mantle of his recently deceased brother (only 5 days after Houdini's Will was read). Hardeen would begin his tour on January 17, 1927 in Bridgeport, CT.