Houdini returns to Appleton in 1897

In my Facebook Live chat yesterday with the great Andrew Basso, I mentioned an article I had recently seen in the April 1, 1897 Appleton Post. I thought I'd put that up today so all can have a read. This was well before Houdini (a.k.a. Mr. Weiss) was famous. This is when he and Bess were touring with the Rogers' Orpheum Stars. So this is really just a story about a local boy's return to his home town and that's one of the things that makes it so interesting and special. 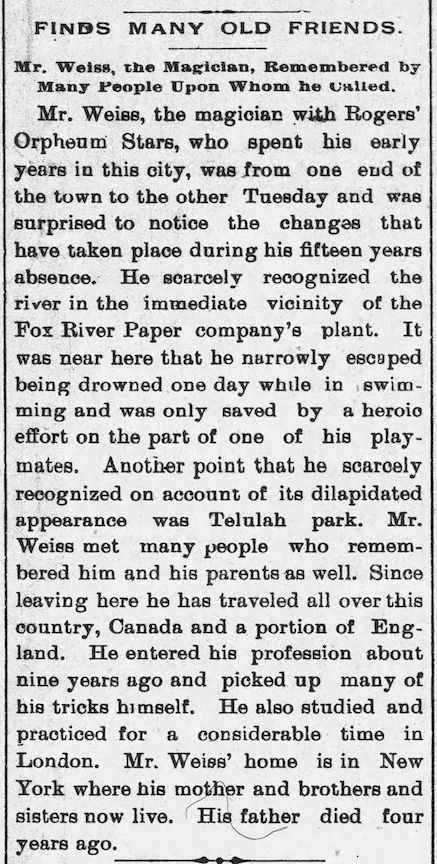 The reference to Houdini almost drowning as a boy is especially intriguing. Ken Silverman always made much of the potential psychological motivations this might have played in Houdini's later water escapes. The trip to England appears to be pure fiction on Houdini's part -- unless this is something waiting to be discovered. The reference to his sisters (plural) I find intriguing as it bolsters the idea that Houdini might have had a half-sister.

Houdini would return to Appleton many times during his career and he would always be interviewed by the Post (most famously by Edna Ferber). But how fun to have discovered the first.

I hope you saw and enjoyed the chat yesterday. This was my first live chat and it was an honor to do it with Andrew. I think the chat is re-watchable HERE. 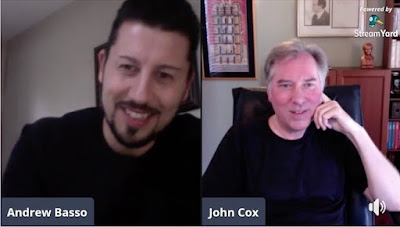 UPDATE: I just realized that Bill Mullins sent me this clipping, I did not "discover" it on my own as implied in my opening paragraph. Thank you Bill!