Yar, The Primeval Man is treatment for an unmade film that Houdini wrote in 1921. You can read Part I HERE. Below we conclude the saga of Yar, Aie, and War, and also explore how Houdini's psychology is on show in this strangest of all his strange tales. 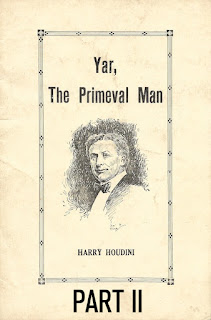 The roar of the Great Animals draws nearer, awakening Yar to a new peril. Huge rocks are dislodged by Yar and the people and rolled down the hill on the approaching animals, some of which retire. Suddenly there is a shriek is a huge tusked monster attacks Aie’s father. Yar runs to his assistance with a sharp pointed stone and kills the monster.

Realizing the value of the animal’s weapons, Yar, with a sharp pointed stone, cuts out the animal’s tusks. He roars with joy for he now has a formidable weapon to battle with the monsters. Yar also notices that none of the animals approach the fire. He swiftly heaps leaves and twigs on it and surrounds the people in a ring of fire. From this barricade they drive the animals back.

Dawn approaching, the people go to refresh themselves at the big water (drinking hole) and to look for food. The males tear the skin and tusks from the animals they have killed during the night. There is feasting. Aie turns with loathing from the blood-dripping flesh. She remembers the roasted meat and wants some of that. Yar also prefers the cooked meat and burrows for more cooked animals. He then remembers the fire. He drags the carcasses over, places them on the fire, and watches the burning meats.

The females, who have gorged themselves with the raw and dripping meat, now look upon the discarded skins. After speculating upon the matter they arrive at the conclusion that Aie and War look very attractive in their furs. In a short time every male and female is gowned in the latest fashion and has a tusk for a weapon.

But Aie and Huf have not forgotten their old feud during all these wonderful experiences. Huf attempts to take Aie from Yar with the result that there ensues a long battle for supremacy. The two roll down a precipice from the top of the hill, and drop into a tree, the branches of which break, sending the two into the rushing waters. There are the fight continues until Yar, holding Huf’s head under the water, vanquishes his opponent.

Aie watches it as her mother did befor her and gurgles with glee to see Huf vanquished by her mate. Yar returns to Sun Girl. He looks about as if he defies anything to harm her and then crushes her in his arms.

Even as they embrace there comes the Great Cold, the forerunner of the Great Doom. How long and how far the huge icebergs had traveled no tongue can tell, but slowly and surely they come on. Yar, his arms protectingly around Aie, watches open-mouthed the oncoming white meance. He clutches his tusk but even as he does he realizes that his weapon is useless against such a monster. 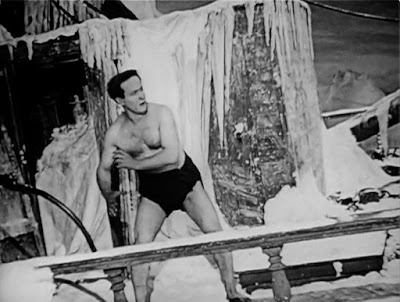 The Little People, oblivious to the approaching of the Great Doom, snuggle into their furs with the increasing severity of the Great Cold. On and on comes the huge white monster, towering above the cliff on which a Little People make their homes.

Aie, terrified by the sight of the monster, shrieks and runs, leaving Yar standing as of hypnotized by the glare of the oncoming demon. Aie runs on—anywhere to escape the monster. Yar catches a glimpse of Aie as she disappears. He pursues her. Down the cliffside he rushes and as he is swifter than Aie he overtakes her and draws her, trembling, in his arms.

In the shallow basin which they have reached, Aie again feel safe, for she cannot see the white monster.

Suddenly a terrific roar reaches them—a roar mightier than Thor’s. The next instant the white monster topples toward them. They back against the wall of the basin, their eyes closed to the terrible thing. When they open them again they are choking in water, brought to great heights by the fall of the iceberg into the basin.

Quickly recovering himself, Yar seizes the sinking Aie and after a harrowing struggle brings her safely back to the ledge. Before the fire which Yar has built outside a cave, Aie regains her composure.

Yar sees that the Little People are unhurt, the White Monster having missed them, though they have suffered from the cold and large pieces of ice that fell on their ledge.

Yar vainly attempts to coax Aie into the cave. He tries to force her but still she refuses. Yar is perplexed. Somehow he cannot drag her in by the hair, as has been the custom. He hears the voice of his mother whimpering and enters the cave leaving Aie seated at the fire.

Attracted by the fire, a tail man (ape) wanders towards Aie, seizes her and attempts to carry her away. Her shrieks attract Yar who battles with the tail-man, kills it and frees Aie.

Yar takes Aie back to the cave but still she refuses to enter. He cannot understand for Aie is his mate. After making his whimpering mother comfortable, Yar ponders over his problem.

An inspiration comes. With a smile of assurance for Aie, Yar gathers up some of the larger branches and twigs. Aie watches him curiously and sees him stand the larger branches and twigs upright, then other across the top until Yar has built a tent like lean to. He then gathers leaves and soft moss which he piles inside the shelter until he has formed a soft downy couch. He motions to Aie to enter.

Aie starts toward the shelter, surveys the inside and then turning an illuminating smile upon Yar, she takes him by both hands, purses up her lips and with her lips on his she draws him into their home.


In Yar, The Primeval Man Houdini seems to be digging deeper into is own psyche than ever before. Of course, the idea that he's the smartest and strongest of all the cavemen is not far below the surface. But the most compelling and most discussed aspect is the three-way relationship between Yar (Houdini), War his mother (Cecelia Weiss), and the outsider "Sun Girl" Aie (the Catholic Bess). One of the things I most like about Yar is it's really the first time Houdini has written the authentic Bess into one of his stories. How like Bess are Aies' "rages" which, interestingly, Yar finds attractive. It's his most unsentimental relationship, and, ironically considering the setting, his most realistic.

As for the de rigueur mother worship, in Yar we actually get an evolution. In the end, Yar is able to set his mother aside and join Aie in private (sexual) domesticity. How different from Bahl Yahn the Strong Man, written in 1907, which concludes with Bahl working the fields with his mother strapped to his back for the rest of his life. And speaking of mothers, I find it intriguing that both stories feature spouses who have been unintentionally handicapped by their husbands. Perhaps a deep seeded feeling that Rabbi Weiss unintentionally threw his spouse and family into a world of desperate struggle?

Interestingly, in June 1922 Sir Arthur Conan Doyle would show footage at an SAM banquet of dinosaurs created using stop motion animation for a proposed film of his book The Lost World (ultimately released in 1925). While Houdini only refers to them as "animals", it's clear Yar is battling an assortment of prehistoric beasts, and Doyle's footage would have shown him how these special effects could be achieved. Had it been made, Yar might have broken new ground. Wouldn't it have been wild if, along with the first movie robot, a Houdini film would have been credited with the first stop motion dinosaur?

Finally, it's fun to note the many similarities between Yar, The Primeval Man and the classic 1966 film One Million Years B.C. starring John Richardson and Raquel Welch. Not just the battles with dinosaurs and rival cavemen as you'd expect, but the core story of a caveman meeting a mate outside his tribe. But I guess there are only so many cave stories one can tell!