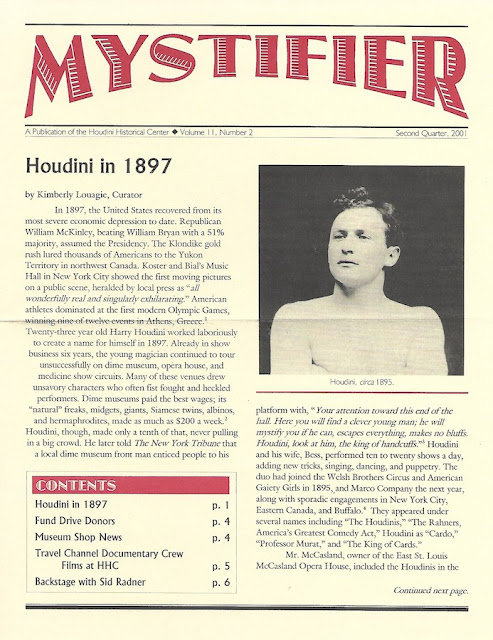 The second quarter 2001 Mystifier is largely made up of an excellent article by HHC curator Kimberly Louagie about "Houdini in 1897." Along with the California Concert Co. she also includes the Houdinis time with Rogers' Orpheum Stars. This is not one of the better documented years in Houdini's life so this article is a treat.

The newsletter continues with the announcement that the HHC website will replace their mailed museum shop catalog (sign of the times). It then covers a recent documentary shoot by the Travel Channel at the center. New members include Bill Martin and Max Maven. Recent Fund Drive Donors are also listed.

Sid Radner begins his "Backstage" column with news that Tom Carrier's Mysteriarch Enterprises has taken over Norman Bigelow's Escape Masters and will relaunch the publication starting October 1, 2001. (Did this ever happen?) Sid then gives a shout out to the new Radisson Paper Valley Hotel in Appleton, and says his sources tell him the Houdini stamp "is closer to becoming a reality." He then alerts readers to a Houdini-related story in the December 2000 issue of Popular Science.

Sid closes by saying he's working with members of New York University's Center for Advanced Technology on a virtual museum devoted to Jewish culture. "One of these days I will get a computer and join the 21st century," says Sid.