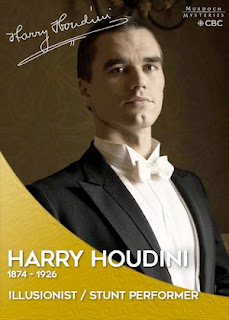 Houdini returned to the popular Canadian series Murdoch Mysteries in the 200th episode titled Staring Blindly into the Future. This time Houdini was portrayed by Grisha Pasternak (right).

The episode, which also featured Nikola Tesla, H.G. Wells and Thomas Edison, first aired in Canada on January 13 and in the U.S. on March 7.

Houdini's first appearance on the series was in the season 2 episode Houdini Whodunit played by Joe Dinicol.