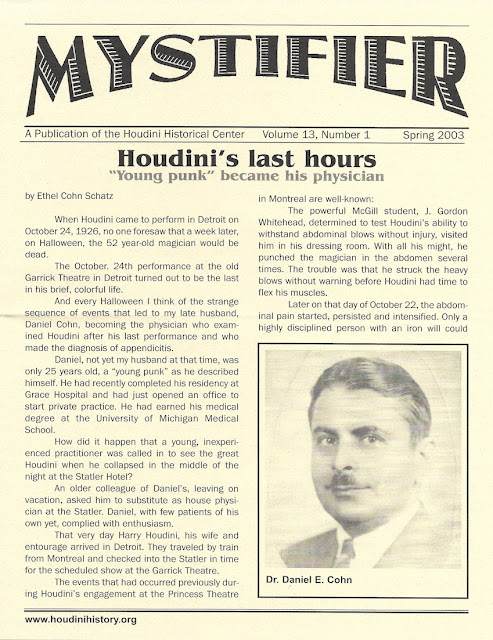 The Winter 2003 Mystifier contains only a single article, but it's a good one! Ethel Cohn Schatz, the widow of Dr. Daniel E. Cohn, writes about her husband's memories of treating Houdini during his final illness (Cohn was the hotel doctor at the Statler). It was Cohn who famously brought Houdini Farmers Chop Suey, as Ethel remembers:

Every evening Daniel sat at Houdini's bedside listening to his halting sentences as he reminisced mostly about his childhood. [...] Though he had no appetite for food, he said to Daniel one evening, "I have a yen for Farmers Chop Suey." Farmers Chop Suey is a favorite dish in Jewish homes, consisting of raw vegetables combined with sour cream. Daniel walked over to a nearby delicatessen on Woodward Avenue and bought two portions. As they were eating, Houdini said, "If I die, don't be surprised if phony spiritualists declare a national holiday."


The newsletter also contains a pitch for contributions to the new Houdini exhibit, noting that for a mere $50,000 your name can be added to a marquee beside the Water Torture Cell. I wonder what cell the museum planned to display? If that's too rich, you can get on the Milk Can marquee for a measly $10,000.

Sid Radner writes his "Backstage" column from his home in Florida, saying a magician with the name Hare E. Houdini is performing locally. He also notes that the city of Appleton has issued a 2nd Day cover of the Houdini Stamp. He then solicits ideas for where to hold the 2003 Official Houdini Seance.

In what might be a sign of the growing friction between Sid and the HHC (namely its director Terry Bergen), there is an "Editors Note" at the end of his column informing readers that the Official Houdini Seance is not affiliated with the HHC.

Finally, the newsletter reports that the Michigan Historical Museum displayed the HHC's Magician Among the Spirits exhibit from September 21, 2002 to January 26, 2003 and drew 49,509 visitors.