Recently our friend Janet Davis drew my attention to an episode of Quincy, M.E. with a magic and escape plot. I have the original TV Guide ad for this in my scrapbook, so I suspect I saw it when it first aired on March 24, 1979 (yes, Houdini's birthday). But I don't remember a thing about it. 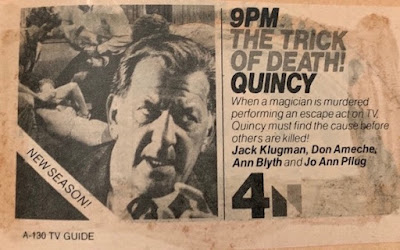 Happily, I was able to find the episode, called "The Death Challenge," on YouTube. It's great fun and contains several nods to Houdini. Don Ameche plays a magician named Harry Whitehead, which can't be a coincidence, can it? Houdini is name checked several times as being Whitehead's mentor. We even get to see a (sky blue?) Milk Can with Houdini's name written on it in groovy '70s script sitting below what I suspect is a Lee Jacobs reproduction King of Cards poster. There are also several scenes filmed inside the Magic Castle in Hollywood. 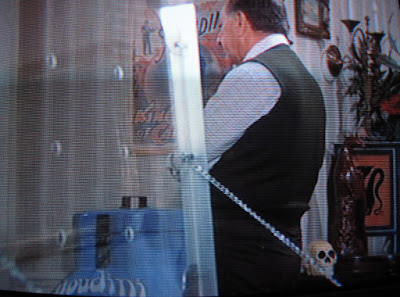 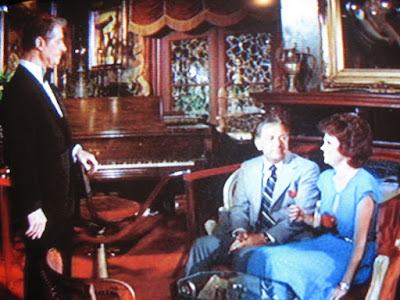 Finally, I'm pretty certain that's Houdini historian and collector Manny Weltman as an extra in the audience calling out for the magician's release. This is right around the time I first met Manny, which is a story I've yet to share. 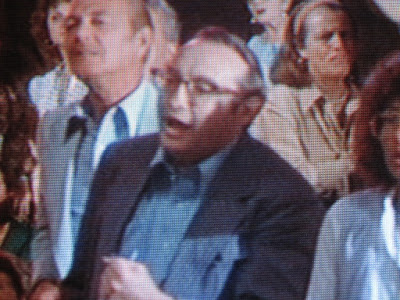 So who done it? That you'll have to discover that for yourselves!

For an excellent overview of this episode and it's guest stars Don Ameche and Ann Blyth check out Another Old Movie Blog.

Thanks to Janet for the pics and tip.