Continuing our look back at the history of Houdini on the cover of Genii, The Conjurors Magazine -- which is celebrating its 75th Anniversary this year -- here we have Vol. 6, No. 2 from October 1941.

Cover art this time is the well-known King of Cards poster. However, when it appeared on this cover, it was a rediscovery, as editor William Larsen notes: "The poster which is reproduced on the cover was found in the Houdini files by Edward Saint, Houdini Archivist, and especially rephotogrpahed, on his instructions, for our use." 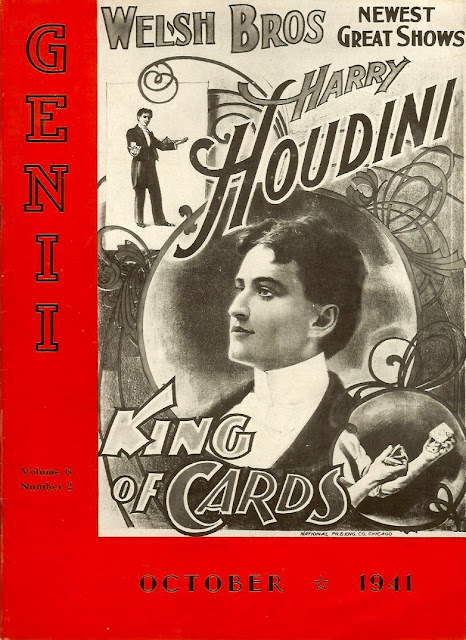 With their direct link to Edward Saint and Bess, these early Genii's are filled with gems such as the King of Cards poster (which you'll note has the Welsh Bros circus header). One can imagine Ed Saint pushing for a Houdini cover every October by offering Larsen some irresistible rarity. As with the October 1940 issue, this issue contains another unpublished Houdini article called "Keynote To Success". Larsen notes in the introduction:

A typed note accompanied this article, reading as follows: "Please edit. Dictated at mid-night in a hurried manner. Mr. Houdini has not yet seen typed copy. E.F. Sanford, Secretary." Dated October 20, 1926, eleven days before Houdini's death, we, and Dr. Saint, Houdini Archivist, believe it the last article even written by the Great Showman.

The brief article is accompanied by a photo captioned as the last portrait Houdini ever had taken. It's worth noting that in his article Houdini singles out Lafayette as "the greatest producer of mysteries that has ever lived, according to my opinion." 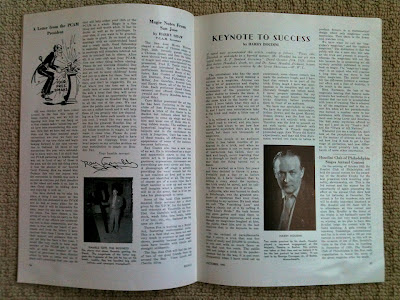 Once again the issue features a memorial page from Bess, and also the story of how Houdini asked, and received, a $1000 fee for performing at a private party. "Nice pay if you can get it", notes Larsen.

Click here for a complete list of all the Genii-Houdini cover issues.
Written by John Cox at 10:30 AM