The highly anticipated new book David Copperfield's History of Magic is released TODAY by Simon & Schuster. No need to explain why this one is a must buy! 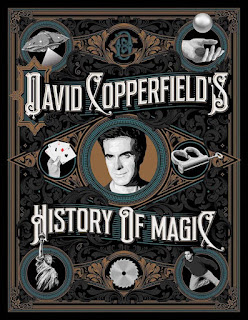 An illustrated, illuminating history of magic from the world’s most successful magician, capturing its most audacious and inventive practitioners, and showcasing the art form’s most famous artifacts housed at David Copperfield’s secret museum.
In this personal journey through the history of magic, David Copperfield profiles twenty-eight of the world’s most groundbreaking magicians. From the 16th-century Englishman who wrote the first book on conjuring to the 19th-century man who fooled Houdini, to the woman who levitated, vanished, and caught bullets in her teeth, David Copperfield’s History of Magic takes you on a wild journey through the remarkable feats of the greatest magicians in history.
The magicians he profiles were all outsiders in their own way, many of them determined to use magic to escape the stifles of class and convention. But they all have one thing in common: they were great innovators who influenced popular culture, adapted to social change, revealed profound insights into the human mind, embraced the latest technological and scientific discoveries, and were inventors themselves.
The incredible stories are complimented by over 100 never-before-seen photographs of artifacts from Copperfield’s exclusive Museum of Magic, including a 16th-century manual on sleight of hand, Houdini’s straightjackets, handcuffs, and water torture chamber, Dante’s famous sawing-in-half apparatus, Alexander’s high-tech turban that allowed him to read people’s minds, and even some coins that may have magically passed through the hands of Abraham Lincoln.

By the end of the book, you’ll be sure to share Copperfield’s passion for the power of magic.

You can purchase David Copperfield's History of Magic on Amazon.com and Amazon.co.uk.
UPDATE: So honored to have received a kind acknowledgment in the book: