Dorothy Dietrich and Dick Brookz will hold their "Original Houdini Seance" from the Houdini Museum in Scranton live on Zoom this Sunday at 12:30pm EST. It will FREE and open for anyone to join. Below is the official press release. 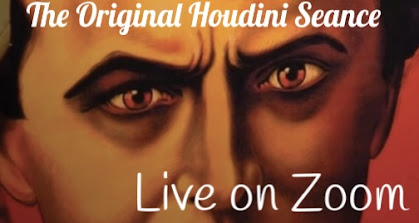 The Original Houdini Seance Zoomed Free from The Houdini Museum on Halloween
You’re invited to The Original Houdini Seance being zoomed to you from The Houdini Museum, Scranton, PA. USA on October 31, Halloween, beginning at 12:30pm Eastern.
The event will be headed up by renowned Magician, Escape Artist and authority on Houdini Dorothy Dietrich. She is a noted Houdini Historian, speaker, and consultant who has appeared on many TV shows including Mysteries At The Museum, Deals From the Dark Side, Tom Snyder, the HBO Special The World’s Greatest Escapes hosted by Tony Curtis and many more. Her talents have taken her all over the world. Dietrich is the Director of The Houdini Museum. Also appearing for the second year on Zoom will be Dick Brookz noted magician, mentalist, comedian, Houdini Historian, and creative consultant. He travels performing and consulting with magic & Houdini projects. Dick is the curator of the Houdini Museum and featured magician.
It will all begin at 12:30 pm on Zoom with a discussion with The Houdini Family Jeff, Forrest & Debbie Blood. They will share some of their fun stories about what it was like growing up in the Houdini Family. Also John Cox, who writes the popular blog WILD ABOUT HARRY (wildabouthoudini.com), will share a few minutes about what happened with Houdini in 2021. John lives in Los Angeles and is currently working on a definitive book about Houdini's life and career. 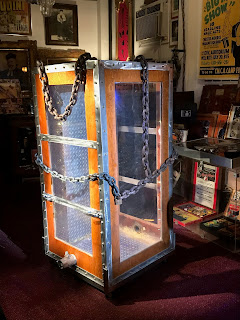 The seance will begin at 1:26 PM, the time Houdini died on Halloween in 1926. This event has always been FREE. The New York Times early on reported Mrs Houdini wanted "the motivation for the spirit-communication to be free from monetary gain." When Bess Houdini stopped doing the seances after ten years she asked renowned Houdini biographer and creator of “The Shadow” series Walter B. Gibson to carry them on. Dorothy Dietrich attended Walters’ Seances for many years around NYC throughout the late 1970’s at New York's legendary Magic Towne House and at Houdini's NYC brownstone on 113th Street, at Houdini’s first childhood home on 79th Street in NYC and at the Houdini Museum in Scranton, PA, the only building in the world dedicated to Houdini. (http://Houdini.org)
When Walter B Gibson got up in years, he turned the responsibility and honor of carrying on the Original Houdini Seance to Dorothy Dietrich. Last year the seance was about to be cancelled because of COVID, but thanks to the technical expertise of Hank Feinberg, it became the first ever virtual Houdini seance and had a worldwide record attendance of 200 guests. Due to demand this year there will be 500 spots available and is likely to fill up quickly, so arrive early.
There will be a very special Houdini souvenir for all who attend.
Each year since his death, a tribute in the form of a seance has been conducted on Halloween, the day Houdini died. This is the only Houdini Seance that dates back directly to Houdini and his wife, Beatrice. You are invited to get a virtual front row seat & close up look at this memorable historic Houdini event.

Will Houdini give us a sign from the Beyond? Who Knows…