Houdini: The OG Ghostbuster (Not Past It podcast)

"Houdini The OG Ghostbuster" is the topic of the latest episode of the Not Past It podcast hosted by Simone Polanen. This is well-produced and researched and it was a pleasure to have been part of it. 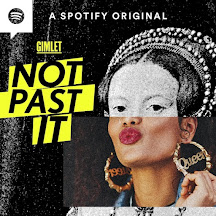 Harry Houdini escaped from handcuffs, sea monsters and torture cells, but his last great illusion defied even the spirits. On October 31, 1936, the famous escape artist was set to come back from the dead. But, as spooky as that sounds, the backstory to uncover America’s most notorious frauds of the day, is even more devilish.

Listen to Not Past It exclusively on Spotify.
UPDATE: The talented Associate Producer of this podcast tweeted out the following and I love it.

For the last few months, I have been fully immersed in the wild world of a Harry Houdini. When I first started, I didn’t think much of the magic man. But the more I learned, the more I said WTF…this man is the fucking coolest and America is very weird.