This piece of surviving Houdini apparatus has always baffled and intrigued me. I've heard it said Houdini called it a "near perfect mystery." Sidney Radner, who acquired it from Hardeen, told me Houdini planned to make this the featured escape in his "3 Shows in One" replacing his Water Torture Cell. But what the heck is it? 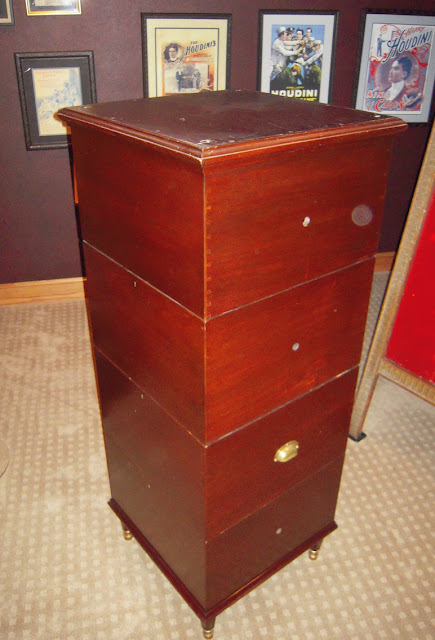 For what I understand, this idea here is Houdini would be encased within these four nested wooden boxes. Iron rods were then placed down the length of the four corners, locking the boxes in place. He may have also been restrained in ropes or chains strung though the holes on either side of the boxes.
Recently I uncovered a review of Houdini's act at the New York Hippodrome during the week of February 16, 1925 (this is before the "3 Shows on One"). What's described here is almost certainly this escape and it's the only record of it that I've ever encountered. Houdini closed the show, offering a test which he claims to be the nearest approach to actual materialization and dematerialization on record. By this, for those who wish enlightenment, he means that he is encased in a stout wooden box, all sides of which are pierced by iron rods and welded so as to make escape ostensibly an impossible thing, but from which after several long minutes he liberates himself.

The "near perfect mystery" was sold in "The Great Houdini Auction" of 2004 and resided in the collection of Arthur Moses for several years (where the above photo was taken). Today it is in another private collection.
If you're interested in learning about more surviving Houdini apparatus, please join me this Wednesday, October 20, for an online ZOOM lecture, "Houdini Lost and Found," part of the 2021 American Museum of Magic Speaker Series. I'll have some exciting and unusual things to share and hope to see you there. Click here for details and tickets. 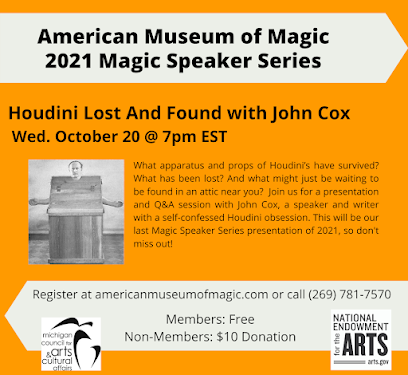