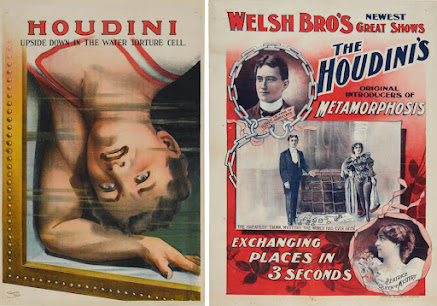 Seven original Houdini posters sold yesterday for astoundingly high prices in Sotheby's auction of The Ricky Jay Collection. A Water Torture Cell poster by The Dangerfield Printing Co. in the UK set what appears to be a new all-time record for a Houdini poster at $151,200. (Interestingly, another one of these posters is due to be auctioned in just a few days by Potter & Potter.) Even a King of Cards poster, which tend to sell in the neighborhood of $12,000, reached a whopping $60,480.
Below are all seven posters with their estimates and prices realized (including premium).

Poster weren't the only Houdini items that fetched head-scratchingly high prices. A challenge handbill from 1913 that might normally sell for $400-$600 sold for $3,024. A copy of The Unmasking of Robert-Houdin signed by Houdini to L. A. Anderson (the daughter-in-law of magician John Henry Anderson) sold for $25,200.
The auction reportedly took in a total of $3,835,694.
UPDATE: Chris Berry at the Conjuring History Facebook page points out yet another record that these posters beat. Chris writes:

I realize that most of those on this page think of the Metamorphasis poster as being "Magic" but at $75,600 it set the record for the most money for a CIRCUS poster (Welsh Bros. Newest Great Shows). The previous record for a "circus-related" poster was a Buffalo Bill multisheet printed by Calhoun that went for $72,000 a few years ago...