The Official Houdini Seance will be held in Chicago 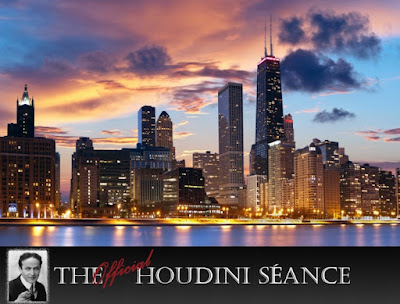 The Official Houdini Seance for 2021 will be held at the Potter & Potter Auction house in Chicago, Illinois. It will be a live (non virtual) seance, but it will not be open to the general public as in years past. Below is the full press release.
Houdini Enthusiasts Meet for Annual Séance
Do the spirits return from the world beyond?

Oct. 21, 2021--Houdini experts and magic historians will convene in Chicago, Illinois for the Official Houdini Séance® October 31, 2021. The event has been a tradition since Harry Houdini, the world’s greatest magician and escapologist, died at 1:26 p.m. on Halloween in 1926.
“Houdini made a pact with various magicians that if there was a way to return from the dead, he would do it,” said séance director, William Radner of West Springfield, Mass. Radner’s father, Sidney was a protégé of Houdini’s brother, Hardeen, and attended seances beginning in the 1940s.
“This annual tradition is very important in the world of magic. As I have come to know the real Houdini story, I am even more intrigued. Houdini was a very determined man, and we owe it to his memory to continue our attempt until he breaks through,” William Radner said.
The Official Houdini Séance® bears the legacy of Houdini’s brother Hardeen, who said his brother would open the unique séance cuffs after his death. The cuffs have been placed on each Official Houdini Séance Table since 1948 hoping for a positive result.
The Official Houdini Séance® has taken place at numerous locations throughout America and internationally with prestigious groups of Inner Circle members. This year is no exception. Aside from Radner, he will be assisted by co-séance director, Tom Boldt, who worked closely with the senior Radner for many years.
Handcuff expert Fred Pittella, Houdini collectors Dr. Bruce Averbook of Ohio, and Robert Somerdin of Florida will be joined by Houdini historians Midge Markey from Washington, and Paul Rosen from Delaware, who will also take part.
The invitation only Official Houdini Séance® will take place at Potter & Potter Auctions in Chicago, Illinois.
Coincidently, on October 30, Potter & Potter will host a significant auction of magic collectables from the historic collection of Ken Klosterman. Up for sale are French magician Jean-Eugene Robert-Houdin’s light and heavy chest, numerous vintage posters, and important memorabilia from the golden age of magic. Robert-Houdin was the inspiration for Houdini’s stage name.
“This is a significant collection of magic history,” said auctioneer Gabe Fajuri of Potter & Potter. “The quality of these pieces, especially the Houdini material, is amazing.”
The Chicago area was important to Houdini’s professional life. He had relationships with the local magicians as president of the Society of American Magicians and often performed his escape and magic act in Chicago while touring on various vaudeville stages. During his last trip to Chicago in 1925, Houdini presented his “3 in 1 Show of magic, escapes, and spiritualist phenomenon.”
“The success of the séance is often determined by the skills of the medium. We are optimistic our psychic medium will be effective,” said Radner. Well-known Chicago psychic, Nolan Webster, Chicago’s most mysterious person, will lead the participants as they explore the world of the afterlife in search of Houdini. “We are all optimists,” said Radner, “I want to believe Houdini can and will return.”

As always, I will report if Harry decides to come back!