The UC Davis Department of Theatre and Dance will present a free workshop of a new musical Death and Harry Houdini on June 2 and 3 in the Wyatt Pavilion Theatre at 8 p.m. Below are details. 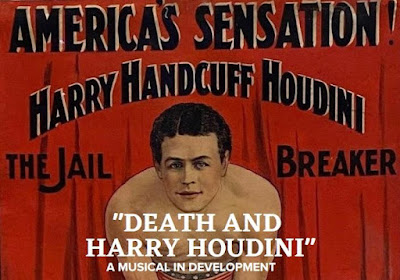 Created by Keaton Wooden, Granada Artist-in-Residence, the project is based on an original play by Nathan Allen. Alumna Lisa Quoresimo (PhD, performance studies, ‘18) directs the piece which features musical staging by graduate student Edward Talton-Jackson and music direction by Graham Sobelman.
This musical in development centers on young Erik Weisz, who after witnessing the death of his father, becomes haunted by death and vows to prove himself its greatest opponent in history. Terrified, but stubborn, Erik transforms his life to become “Harry Houdini” and uses his skills for showmanship, strength, and illusion to prove to death, and himself, that he fears nothing. Along the way Harry meets his future wife, foils charlatans, and inspires a nation to believe in the impossible. How will Harry finally defeat the greatest foe every magician, human, and artist faces?