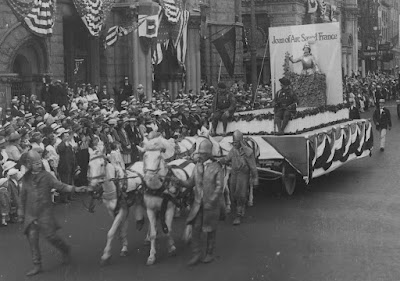 On April 20, 1918, a War Stamp and Liberty Loan parade snaked its way through New York City starting at 6th Avenue and 45th Street. Among the marching bands and dignitaries were three large floats created by the New York Hippodrome. One float featured star Belle Story costumed as Joan of Arc. A second carried a browning machine gun. And as for the third float, well, you can read for yourself:
Houdini was playing the Hippodrome as part of the revue show Cheer Up at this time. I've not been able to find a photo of this float, but the photo at the top of this post will give an idea of what it might have looked like (this is from a later War Stamp parade in Newark). But what were these "German instruments of torture"? A follow-up story provides the answer:
I'm pretty certain what crowds saw that day was Houdini's own gibbet. This is sometimes called an Iron Maiden, but that is not technically correct. (At least according to this guy, and I'm not about to argue with him!) Houdini's gibbet was made by blacksmiths in Scotland as a challenge escape in 1909. Houdini would repeat the gibbet challenge on occasion and frequently display the macabre device. He even once set it out on a Baltimore street during a suspended straitjacket escape.
So how fair was it to present the gibbet as a "German torture device"? As you might expect, this was pure war time propaganda. Gibbets were not unique to Germany. They had been used throughout Europe and even in America. But the practice of gibbeting, in which freshly executed corpses would be put on display until they decayed, ceased by the 1840s.
Sidney Radner acquired Houdini's gibbet from Hardeen and displayed it at both the Houdini Magical Hall of Fame and the Houdini Historical Center in Appleton. In 2004 David Copperfield acquired the gibbet in The Great Houdini Auction for $65,000. He then re-created the original frame using period wood. Another fun fact: this frame is the actual "gibbet." The iron cage hanging inside is called the gibbet irons, gibbet cage, or sometimes a crows cage. (Again, this guy.)
Today Houdini's gibbet resides happily in Copperfield's International Museum and Library of the Conjuring Arts in Las Vegas, where it still looks ready for use!
In a parade, I mean. 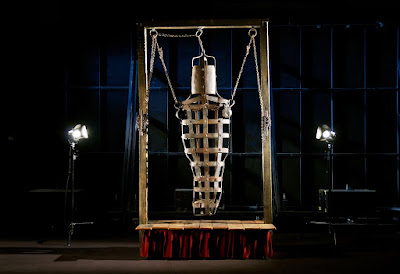