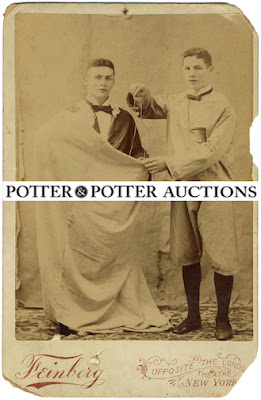 The earliest known professional photo of Houdini and his brother, Theo, sold today for a whopping $78,000 (including 20% buyer's premium) at Potter & Potter's "Houdiniana and Magic Memorabilia" auction. The photo captures "The Brothers Houdini" at the start of their careers and was taken by Feinberg in New York. The auction dates it as 1892/3. There are at least three other known images from this photo session, but this is the only original I've ever seen. A treasure indeed and a new record for a Houdini photo.
The auction contained many other rarities from the family of Houdini's brother, William Weiss, and the collection of Manny Weltman (which you might recall I mentioned here). One of the stranger items was a carved cigarette holder presented given to William by Houdini. The auction says this rarity demonstrates "not only their close relationship, but Houdini’s generosity and self-love." But I can't help but think it might have been a gag gift. I can see his brother saying something like, "Every time I open the paper I see Harry's ass." So Houdini gives him this. Well, someone paid $20,400 for that view today.
Speaking of Bill Weiss, his inscribed portrait sold for $660. An hitherto unknown photo of Houdini inscribed in 1904 took in $21,600. A portrait of a very young Theo Weiss sold for $3600. A photo of the young Cecelia Weiss with her mother and sister dated 1874--the auction listing speculates she may be pregnant (with you know who)--sold for $2400. This was the first appearance at auction for any of these rarities.
But the biggest seller in the auction was a spiritualism and magic scrapbook given to Houdini by Henry Ridgley Evans in 1924. This came from the Manny Weltman collection and was one of the items that failed to meet the reserve in the Weltman Swann auction in 2002. Today it blew away the auction estimate of $30,000 - $60,000 and landed at a wild $102,000 (including premium).
However, the item that most bewitched me personally was a framed engraved print showing Moses transforming a staff into a serpent before a Pharaoh. This was obtained by Larry Weeks from the Houdini family and once hung inside Houdini's home. This blew past its $400-800 estimate and landed at $6,600. Happily, the winner was our friend Lee Terbosic. Congrats Lee! Now the hunt is on for a photo of this hanging inside 278.
Afraid the only thing I came away with was the auction catalog. But it's a beauty! 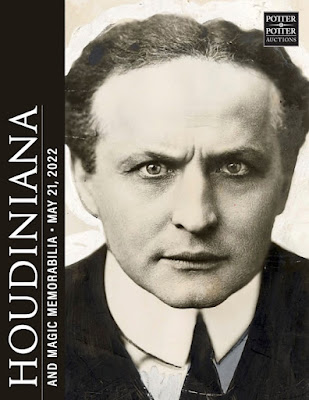 Congrats to all the winners and to Gabe Fajuri at Potter & Potter for another wildly successful Houdiniana auction.
Related:
Written by John Cox at 1:53 PM