Did Houdini do a "bag jump" in Providence?

Yesterday's Providence Journal article about a relation of Bert V. Clark opening a safe for the city of Bristol made me look back on some of the 1950 articles about Houdini's trusted locksmith. Of course, I found something that sent me down a new rabbit hole! Here's the relevant excerpt:
A jump from the Crawford Street Bridge in Providence isn't something I have in my chronology, nor do I have a record of any bridge jump in which Houdini was put inside a bag. But I have seen it mentioned. In Rochester Houdini announced that he would be "sewn into a sack like Monte Cristo" and thrown from the Weighlock Bridge. But when Houdini did the actual escape on May 7, 1907, the bag was left behind.
I do trust Clark's recollections so I'm assuming that this happened. But when? My guess it would be early in Houdini's bridge jump career, so probably around the time of the Rochester leap. Candidates would be the two weeks he played Providence in 1907 (Jan. 28 to Feb. 10) or the week of April 13-19, 1908. In 1911 Houdini jumped handcuffed from the upper deck of the steamer Warwick into the Providence river, but no bag involved.
Here's a photo of the Crawford Street Bridge as it appeared in 1906. Looks like a perfect spot for a "bag jump" to me! 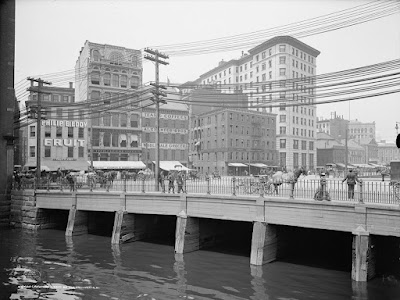