Houdini and his doughboys take a dunk

Here's a wet one for this Memorial Day.
You'll often hear the story of how Houdini taught World War I soldiers the secrets of escaping from German handcuffs and restraints. This is true. Houdini was provided with his own "class room" on the promenade level of the New York Hippodrome Theater where he gave his lessons to a regular rotation of doughboys.
While this did generate publicity, it wasn't a publicity stunt. Houdini's classes were actually sanctioned by the War Department, as you can see in the below.
Recently I found there was another class that Houdini gave to soldiers from Camp Upton (where he had entertained a few weeks earlier). But this time the lesson was given in the famous Hippodrome water tank. Check it out.
The Hippodrome water tank, which was under the stage and would be opened for special aquatic performances, was equipped with several secret underwater diving bells. I wonder if these came into play here -- maybe showing the soldiers how to survive inside pockets or air within a sunken ship? Below is a photo of the bells from the blog New Yorker State of Mind. 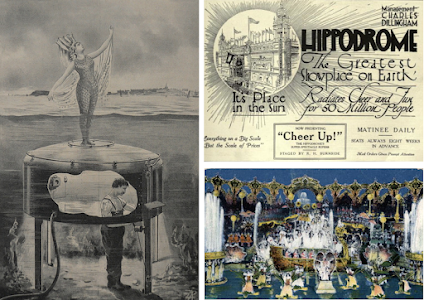 By the way, Houdini did some notable underwater challenge escapes in the Hippodrome tank doing his lengthy Cheer Up engagement, once from a straitjacket. I suspect he may have utilized these bells as well. But that's a different story.
Have a Safe and Happy Memorial Day

Top image: "Soldiers Swimming and Playing in the Water during World War I" from Mondovisions. Clippings: Newspapers.com.
Related:
Written by John Cox at 9:18 AM