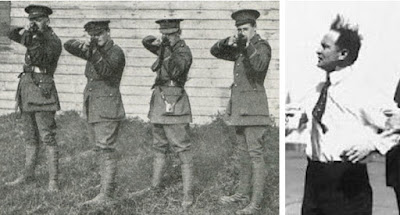 Most Houdini biographies contain the story of how Houdini announced he would perform the infamous bullet catch trick shortly after the onstage death of magician William Robinson, a.k.a. Chung Ling Soo, in 1918. But magician Harry Kellar wrote Houdini a heartfelt letter talking him out of it and Houdini cancelled the performance. Turns out that scenario isn't strictly accurate. But we will get to that.
Milbourne Christopher in Houdini The Untold Story was the first to identify the event at which Houdini proposed to do the trick as a gala S.A.M. benefit for the Showmen's Hospital Fund at the New York Hippodrome on April 21, 1918. It's said the bullet catch was widely advertised. However, I've never been able to find any advertisement that confirms this. Below is a typical advert for the benefit that mentions "his new death defying sensation." But this could be the Water Torture Cell.
Likewise, the program for the event itself--an original of which is in the Harry Ransom Center--makes no mention of the bullet catch. It only shows that Houdini would perform his Water Torture Cell that evening.
I began to consider the possibility that famous cancelled bullet catch might have been a back engineered Houdini myth. But while searching for something completely unrelated, I finally found the smoking gun!
So, yes, it appears Houdini did intend to do the bullet catch at this Hippodrome show. A fantastic new detail here is that Houdini's firing squad would be made up of real doughboys from the 71st Regiment using regulation army rifles. What a terrific modern piece of staging. I'm actually sorry this didn't happen. But why didn't it happen?
Here's where the truth diverges from the familiar telling. While Kellar did indeed write a heartfelt letter of warning to Houdini, he wrote that letter after the benefit (on May 1st). So the reason Houdini dropped the bullet catch wasn't Kellar. He dropped it on the request of the Hippodrome management.
The following is from an account of the benefit that appeared in the April 1918 issue of MUM: 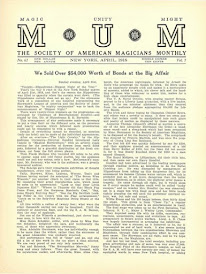 Houdini had been advertised in the leading newspapers through reading notices, as intending to do the Bullet Catching Act. He was dissuaded by management of Hippodrome from taking up this dangerous feat, for he announced his famous Chinese water torture cell, which is probably just as, if not more, dangerous than the bullet catching business, as in either, the slightest error means a tragedy.

(To give credit where it is due, Bill Kalush in The Secret Life of Houdini was the first and so far only biographer to present the correct chronology of the bullet catch and Kellar letter.)
It's been suggested that Houdini never actually intended to perform the bullet catch and that he just announced it for the publicity. Maybe. But Houdini felt strongly about doing what he advertised and not "breaking faith" with his audience (a prime example here). Also, this was a prestigious S.A.M. event for charity that Houdini himself emceed. Doesn't seem like the kind of event in which you would want to be disingenuous in any way. But it is a possibility.
It's also worth pointing out that in the weeks following Chung Ling Soo's death there was gossip in magic circles that the magician may have been murdered. Joe Hayman, who informed Houdini of Robinson's death, offered some dark speculation that Houdini shared with Harry Kellar. Hence Kellar's warning that the same fate could befall Houdini -- "some dog might 'job' you." But an inquest into Soo's death discovered faulty equipment was the culprit.
So there we go. We've confirmed when and where Houdini planned to do the bullet catch. We've learned how he intended to stage it. And we know why he didn't. There's also the possibility that Houdini did the effect early in his career, but that's another story.
Thanks to Joe Fox at the Magic Castle Library for the MUM clipping and Eric Colleary at the Harry Ransom Center for a look at the original program.
Related:
Written by John Cox at 7:22 AM