Below is a photo that I think most people are familiar with as it appears in the book The Secrets of Houdini (although I don't recall it appearing anywhere else). It shows Houdini doing a headstand atop a stone lion. Because why not!? 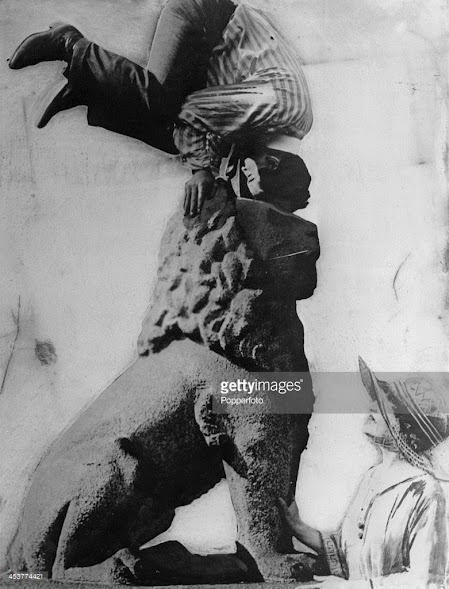 Of course, when I see something like this I want to know the where, when, and why of it. The Secrets of Houdini identifies this as Houdini "practicing a handstand at the Lasky Studio, Hollywood." But I have a different idea about where this was taken.
Last year I did a post in which I was able to identify (with the help of John Bengtson) the famous photos of Houdini hanging from a large wall as being the retaining wall that fronted the old County Court House in downtown Los Angeles. Here he's dressed the same, he's doing yet another piece of public acrobatics, and that appears to be his Grim Game co-star, Ann Forrest, who is also present in the wall photos. So I had another look at the photo of the old Court House and, sure enough, it had two stone lions out front! 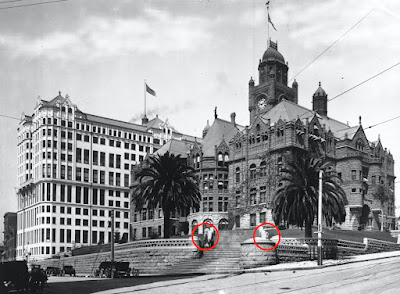 Below is a better photo of one of the court house lions. Sure looks the same to me! 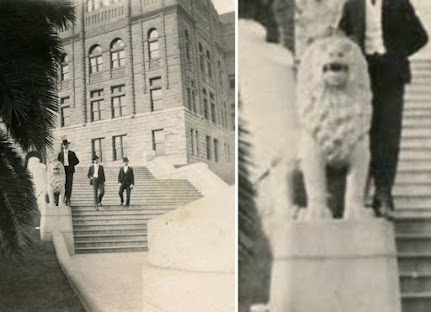 I would say it's almost certain one of these court house statues is "Houdini's lion". I guess we won't know which one unless another photo surfaces. But as the statues and the court house are now long gone, this is a photo op that can only roar in the past.