I'm happy to see how many people enjoyed re-watching (or watching for the first time) the great 1970 BBC documentary The Truth About Houdini, which I've uploaded to my WILD ABOUT HARRY YouTube Channel.
One thing that came up in the comments was the cut scene of Sidney Radner demonstrating a wooden cross escape. The scene was originally in the film at 00:13:06, right before James Randi talks about the safe escape. But it is no longer in any existing print that I've ever seen. 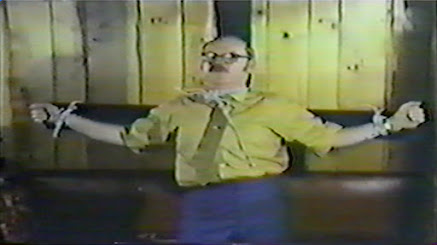 The scene runs just over a minute and a half and after Sid escapes he exposes the method. Could this be why it was cut? I have read that The Magic Circle was upset by exposures in this doc, so perhaps it was cut after the initial UK airing? Or maybe it was cut from the U.S. version for fear that the quasi-religious imagery might offend in some markets?
If anyone knows the story of this missing scene, I'd love to hear it!
By the way, I've yet to find any account of Houdini actually doing a cross escape during his career. So there's that mystery as well!
UPDATE: You can now watch this clip as a member of my Patreon by clicking the image below.