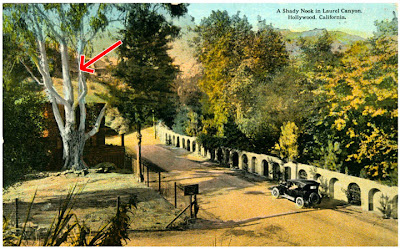 Los Angeles Relics has posted this vintage postcard to their Facebook page. The card shows "A Shady Nook in Laurel Canyon. Hollywood, California." But to Houdini buffs, it shows much more!

This card was first unearthed by Houdini expert and Laurel Canyon resident, Patrick Culliton, who points out that the arched porch of a house, just visible between the tree branches, is 2435 Laurel Canyon Blvd., the real house that Houdini (may have) occupied when he was filming his movies for Famous Players-Lasky in 1919. It was later lived in by Bess and Ed Saint until it was sold in 1935.

Of course, local legend has it that Houdini lived in the large estate across the street at what is now 2400 Laurel Canyon Blvd. That property is now called Houdini House and is rented out for events. Houdini is also sometimes associated with another mansion just up the street.

The house at 2435 Laurel Canyon Blvd. was torn down in the 1960s when the bluff was graded back to widened the street. Today it is just empty hillside with the top of a modern street light (visible in the pic on the right) showing the approximate location of the old house. 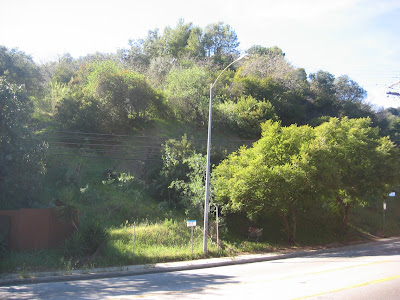 You can read more about the real "Houdini House" at Patrick Culliton's website, Houdini's Ghost.

UPDATE: Inside the Laurel Canyon Houdini Estate
Written by John Cox at 1:37 PM