Houdini and the Presidents

In honor of this Presidents' Day, I thought I'd repost this original photo of Houdini and Theodore Roosevelt taken aboard the ocean liner Imperator on June 23, 1914. 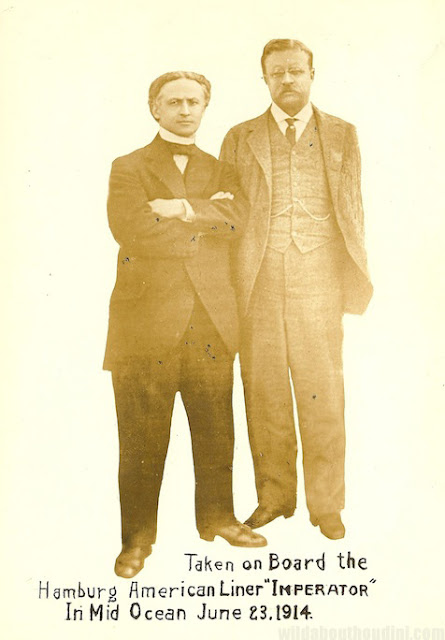 It was aboard this "last boat out of Germany" (before the outbreak WWI) that Houdini would amaze the former President with a demonstration of Spirit Slates -- accurately pinpointing where Roosevelt had just spent his Christmas holiday. The next day it was said that Roosevelt took Houdini aside on deck and asked him, "man to man," if what he did was genuine Spiritualism.

"No, Colonel," Houdini is said to have answered. "It was just hocus pocus."

The above photo is from my own collection and is glued into an inscribed copy of The Unmasking of Robert-Houdin (those ink flecks are from Houdini's signature). I've seen other copies of Unmasking with this same photo glued inside. I'm not sure when Houdini did these or how many exist, but it makes for a nice presentation copy.

The original version of this photo (right) shows Houdini and Roosevelt standing amid a group of other passengers. Houdini had the other men cropped out. This wouldn't be the only controversy related to this photo, as David Saltman explored at The Houdini File.

In his book Shots At Sea

, Tom Lalicki had some fun with Houdini and Roosevelt's ocean-bound adventures, although he set his action aboard the Lusitania and worked in his fictional young hero Nate Fuller. In 2011 a remarkable artifact from this voyage sold on eBay.

While fiercely patriotic, Houdini was largely apolitical. He didn't belong to any political party and was said to have voted only once in his life for Warren G. Harding in 1920. In 1914 he met with President Woodrow Wilson, who told the magician: "Sir, I envy you your ability of escaping from tight places. Sometimes I wish I were able to do the same."

Of course, Houdini was also photographed with his favorite President, Abraham Lincoln...via the spirit world! 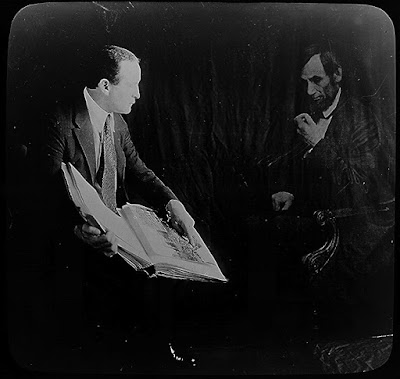