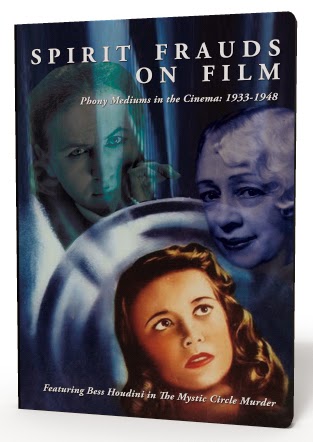 Here's another new DVD release from Todd Karr's The Miracle Factory that will be of interest to Houdini buffs. Spirit Frauds on Film: Phony Mediums in the Cinema 1933-1948 features three movies about spiritualist fakers, including Religious Racketeers (aka Mystic Circle Murder) which contains a rare sound appearance by Bess Houdini. Here's what's on the disc:

• Sucker Money (1933): A fraudulent spiritualist casts a spell over a rich banker’s daughter to steal his money.

• The Mystic Circle Murder (1938): Featuring scenes with Mrs. Bess Houdini, this film tells the tale of a phony medium who takes advanatge of a berieved woman, but is exposed by a helpful reporter.

• The Amazing Mr. X (1948): A rich woman tries to contact her dead husband through an unscrupulous medium, but the man turns out to still be alive.

Once again, Todd is offering readers of WILD ABOUT HARRY a $10 discount by using the promo code FEB10 at checkout. The offer is good through February 15, 2015.


Purchase Spirit Frauds on Film from The Miracle Factory.