When Leonard Nimoy went In Search Of Houdini

Today comes the sad news that the great Leonard Nimoy has died at age 83. While Nimoy will forever be known as Mr. Spock of Star Trek fame, in the early 1980s he had a memorable brush with Houdini.

For many years, Nimoy hosted the popular series In Search Of... Each week the show investigated some fresh mystery, such as Bigfoot, UFOs, or the Loch Ness Monster. On November 21, 1981, the show went In Search Of... Houdini's Secrets. The episode featured Nimoy narrating from the Houdini Seance Room at the Magic Castle (in a cape!). 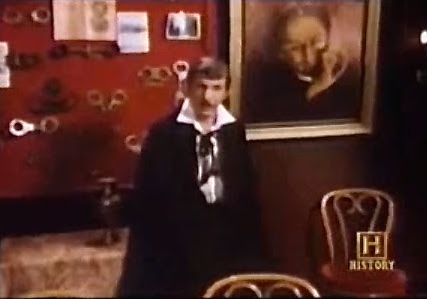 Nimoy almost had a second encounter with the Master Mystifier in the early 1990s. According the Dean Carnegie (The Magic Detective), William Shatner said on a talk show that he was working on turning his Houdini book, BELIEVE, into a play in which he would play Houdini and Leonard Nimoy would play Sherlock Holmes. This, of course, never came to be.