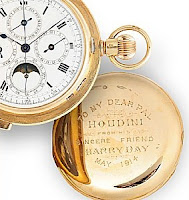 Described as a "hunter cased minute repeating chronograph with calendar and moon phases", the watch carries an inscription showing it was given to Houdini by Day in May 1914. This was right at the time Houdini was performing his "Grand Magical Revue" in England. It was also Houdini's last tour of the UK before the outbreak of World War I, so it's possible this was a farewell gift from Day.

According to the auction, after Houdini's death the watch was given to his nephew, Harry White.
Written by John Cox at 7:34 PM