In October 1972, Genii The Conjurors' Magazine produced a beautiful "Special Houdini Issue." It started with a cover that featured a terrific unpublished photo of Houdini in handcuffs. However, a certain poison was starting to course through the Genii editorial offices regarding Houdini, and that can also be sensed in this issue. 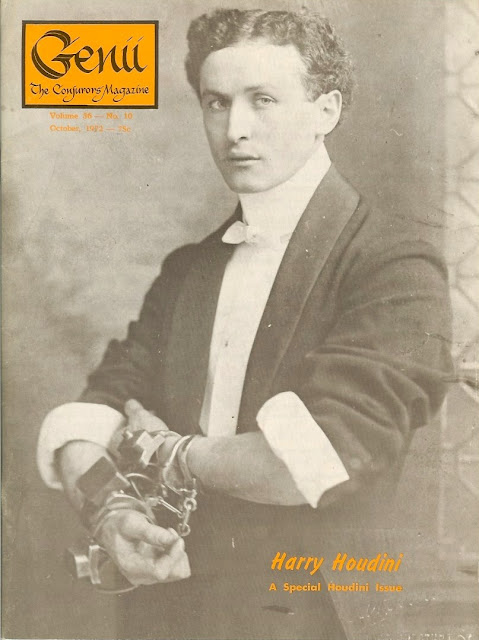 The force behind this issue was Houdini collector, Manny Weltman, who provides photos and articles from his formidable collection. The magazine also reprints Weltman's article from the February 1971 issue of Westways, "Houdini The Man From Beyond...or waiting for Harry".

The issue also reprints Houdini's article about his straitjacket escape from a 1908 Conjurers Monthly Magazine (also reprinted in The Original Houdini Scrapbook by Gibson in 1976), and an autobiographical article written by Houdini reprinted from The Magician Annual 1909-10. An article by William Larsen, Sr. on "The Great Handcuff Escape Act" is also included with photos from the Weltman collection, including the famous nude photo of Houdini emerging from a jail cell. 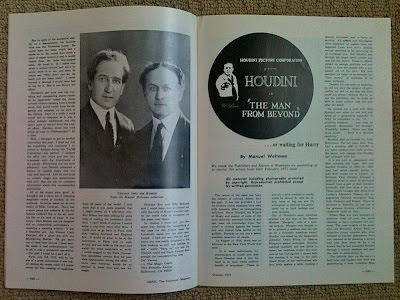 The fact that HOUDINI is a household word today speaks well of the man no matter what people say about him. By this I mean I've heard so many stories about Houdini over the years that one really doesn't know what to believe. Undoubtedly he was a great showman and fine performer. He died two years before I was born and therefore I cannot talk about the man.


This is certainly a tonal change from past Houdini issues in which Larsen paid great homage to Houdini as the man who "has done more to popularize magic than any living magician." So what's going on?

Well, by this time Dai Vernon was deeply involved in the West Coast magic scene. Known as The Professor, he was a fixture at The Magic Castle and contributed a regular column to Genii called "The Vernon Touch." He was also a well-known and very vocal Houdini hater. Vernon doesn't conceal his feelings even in this Special Houdini Issue. He opens his column with:

Although Houdini was, without doubt, the world's greatest handcuff king and also a great showman, he was not one of the "greats" that I admired by any stretch of the imagination. He was a supreme egotist, true, but we must be honest and say that it was this egotism that made Houdini the famous person he was and still is today!


Vernon goes on to talk about Hardeen, whom he enjoyed as being more "down to earth" than his brother, and also notes that Bess Houdini was godmother to his eldest son, Edward.

I suspect it's the influence and reverence for Dai Vernon that is responsible for Genii becoming a little gun shy in regards to Houdini from this point on. In fact, there would not be another issue devoted to him for over 20 years.