The Magic Castle's new Houdini Water Torture Cell aquarium was revealed last night on Animal Planet's Tanked. The aquarium sits in the Inner Circle and was made by request of AMA President Neil Patrick Harris for the Magic Castle's 50th Anniversary celebrations next year.

The hour long episode chronicled the process of designing and building the 240 gallon aquarium, along with a lot of "reality" show complications, such as the tank springing a leak and threatening to flood the William Larsen Sr. Memorial Library. The episode gave a very nice look inside the Castle.

While they didn't show what the designers used as a photographic reference, the tank is a pretty respectable reproduction of Houdini's real Water Torture Cell. The stocks in particular evoke the real cell, with the front hand grips, properly shaped hinges, and lifting ringlets. I just wish they would have completely framed the glass with riveted "brass" strips instead of leaving it with just two on each side. There even appears to be space for two horizontal strips top and bottom. But that's me being picky. 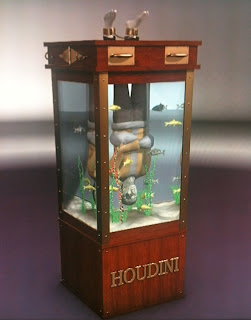 The Houdini mannequin inside was created by Quantum Creation FX, who worked from a Houdini portrait photo. The vintage style straitjacket the mannequin is wearing was acquired from Houdini's Magic Shop in Las Vegas.

In the show, reproduction Houdini posters flank each side of the tank. But as you can see in the photo above -- which the Magic Castle has given me special permission to post -- original Alexander and Will Rock/Thurston Show posters have replaced the Houdini sheets, which I actually think looks much better. Also notice the addition of a nice handcuff display case in the corner. While this wasn't part of the show, it was added to the Inner Circle along with the tank and is a pretty cool addition in itself. The cuffs come from the collection of Jim Bentley and include reproductions of the French Letter cuff, the Russian manacle, and the Mirror handcuffs.

For those of you who are more interested in what's inside the aquarium, the idea was to fill the tank with "dangerous" fish, including: Sabertooth Barracuda (monster fish from the Amazon with huge teeth); Redtail Barracuda (called "Dogfish" because of their canine-like teeth); Spotted Metynnis (relatives of the piranha); Blue Eye Pleco (extremely rare fish from Columbia that can eat and digest wood); and an Asian Swamp Eel (known to be good escape artists who can survive out of water for several hours).

Neil Patrick Harris was very happy with the final result and gave AMA memberships to hosts Wayde King and Brett Raymer on the spot. He predicted that the Houdini aquarium would become a new "destination" inside the Castle for members and visitors. "I can't believe no one has thought of this idea before," he enthused.

However, someone did think of this before -- Houdini! In his original presentation of the escape, Houdini portrayed it as an aquarium. In a playlet called Challenged or Houdini Upside Down (which Houdini performed only once to copyright his new effect), a "multimillionaire sportsman" named Tim Connor eyeballs his clubhouse aquarium and concocts the idea of locking Houdini inside it upside down.

It's kind of ironic that after 100 years the Water Torture Cell has returned to its original purpose as a private clubhouse aquarium.


This Friday marks the 100th Anniversary of Houdini's first performance of the Water Torture Cell on September 21, 1912. Watch for a special look back the history of cell right here on WILD ABOUT HARRY.