For the 100th Anniversary of Houdini's Water Torture Cell, Richard Sherry and Dayle Krall of Sherry and Krall Magic have paid their own unique tribute by recreating the escape exactly as Houdini first performed it in 1912. As you can see, they are using the inner cage and locking cross bands that Houdini later abandoned.

According to Richard, "this version is a lot harder than the later version". And from how he explained the method of escape to me, it's also more dangerous. 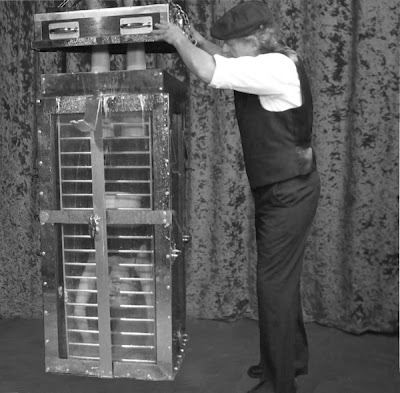 Click to read about how Richard Sherry created his authentic reproduction of Houdini's original Water Torture Cell.
Written by John Cox at 8:59 AM