One of my favorite things about Houdini's anti-spiritualism crusade is the fact that he would don disguises to gain access to seance rooms. Mid-way through the seance he would leap up and reveal himself. Houdini actually started using disguises early in his career to gain access to theaters featuring rival Handcuff Kings. In his raucous exposé of Hilbert in Cardiff, he even wore a false nose fashioned out of wax.

Houdini's favorite character was that of a bespectacled old man with a cane. According to Christopher Sandford in Houdini and Conan Doyle, Houdini called this character F. Raud -- Fraud. (This name was also used by Houdini's agent, Rose Mackenberg, who went undercover as the Reverend Francis Raud). Houdini may have also used the names "Mr. Smith" and "Mr. White". Interestingly he also "hid" behind the name of White -- the anglicized form of Weiss -- during his days as a runaway.

Below are photos of Houdini in full disguise. Eat your heart out, Sherlock Holmes. 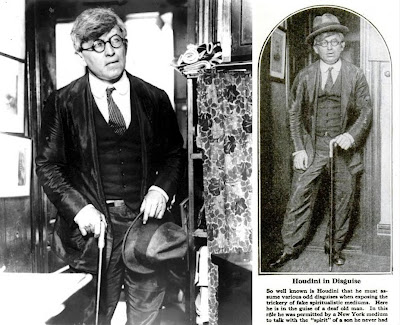 I'm surprised Houdini's adventures in disguise have yet to be dramatized in any of the films made about his life. Certainly this was one of his most cinematic activities. Although the 1953 Paramount film HOUDINI does show Harry playing an old man as part of a performance at Tony Pastor's dinner theatre, so this could be seen as a nod to Houdini's abilities as a master of disguise.