Eachus Publishing and the Houdini Museum in Scranton have released their 18 card preview set of Houdini: The World's First Superhero trading cards. Only a limited number of sets are available. Each set includes a cover card, Houdini poster cards, original art cards, and a surprise insert. 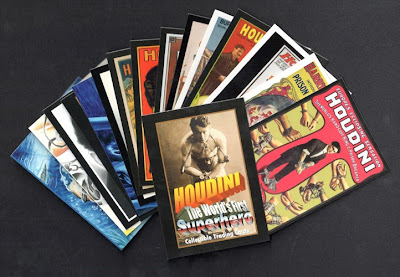 This preview will be followed by the official 54 card set to be released at the Houdini Museum's Original Houdini Seance on October 31st.

Purchase the Houdini: The World's First Superhero 18 card preview set at Eachus Publishing or All About Magicians.com (beware sets on eBay that are only 16 cards).
Written by John Cox at 6:44 AM