The master mystery of the grim drain

Kevin Connolly has posted a terrific photo of Houdini tied between two drain pipes spouting water at his blog, Houdini Himself [UPDATE: Kevin's site is now offline so this photo is no longer available.] It's an image I've never seen before. According to Kevin, the shot appeared in a 1920 magazine and is from Houdini's silent serial, The Master Mystery. That's exciting because this means it is one of the "lost" escapes not on the existing print/DVD (according to Patrick Culliton, the original uncut serial has two escapes per episode).

I'm wondering if the photo below, from my own collection, is from this same sequence? This pic appears in Christopher's Houdini A Pictorial Life with photos from The Grim Game; but this isn't in The Grim Game screenplay and the clothes and ropes on Houdini seem to match Kevin's shot. However, he doesn't appear wet here. 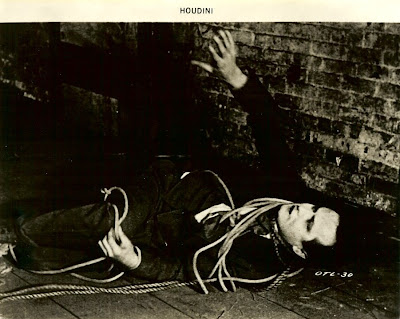 Anyway, check out the terrific photo of Houdini lashed to "the grim drain" at Kevin Connolly's Houdini Himself.

UPDATE: Checking out The Master Mystery photoplay, I believe I've found the escape depicted in Kevin's photo. The scene is set inside a water tank on top of De Luxe Dora's apartment (page 138):
 


There were two spouts at the bottom of the tank through which water was pumped. Also there were pipes running upward. To these pipes they tied Locke. Then the men climbed out and, as their last fiendish act, turned the water on.

With a sneer Dora turned and led the way down-stairs again.

"They'll find his body when they have to clean the tank again," she exclaimed.


Having found this description, I now don't think the photo I posted above is from the same sequence. There we see brick walls and a wood floor. Certainly not inside a water tank. Kevin believes this pic might be from the acid vat sequence.
Written by John Cox at 10:32 AM