In October 1964, Genii The Conjurors' Magazine produced their most unique "Houdini Memorial Issue" to date. Interestingly, the name of the magazine does not even appear on the cover, which shows the escape artist Steranko sitting before a collection of Houdini posters and playbills. 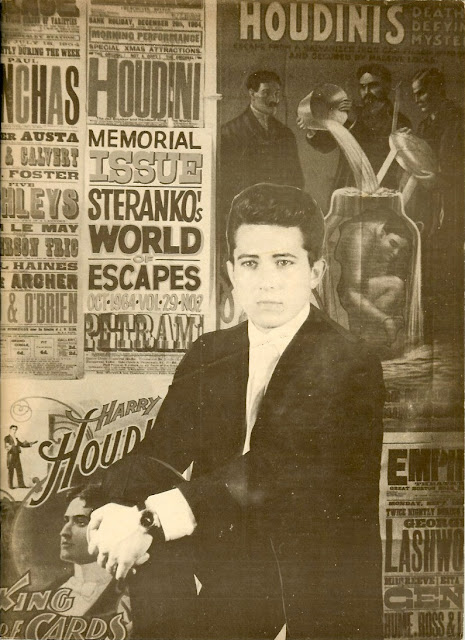 In his Genii Speaks column, editor Bill Larsen writes, "I had the help of Steranko who started out to write a special issue and ended up writing what I believe to be a sensational book on escapes. I'm sure this is going to be one of the most sought after issues ever published."

Indeed, the Steranko section, called "Steranko's World of Escapes", is a whopping 48 pages and makes up almost the entire magazine. It is an incredible resource for anyone interested in escape techniques. In his introduction, Steranko writes:

Houdini was, in fact, only a fair magician. But the heart of a magician is dark and contradictory for Houdini is considered the Prince of Showmen. The ideas that poured forth from this pioneer and prime exponent of escape, were sometimes outrageous, often incredible but always fascinating. To him we dedicate our book.


The "book" is then organized into seven profusely illustrated sections on: lock picking ("Have Locks...Will Travel"); ropes, chains, and straitjackets ("A Matter of Technique"); jail escapes ("Stone Walls Do Not a Prison Make"); quick release escapes ("Dynamic Magic"); death defying escapes ("Danger is My Business"); new and experimental escapes, inducing frozen in ice ("Escape no More"); and tips for building, publicizing, and performing an escape act ("I, Liberationist"). 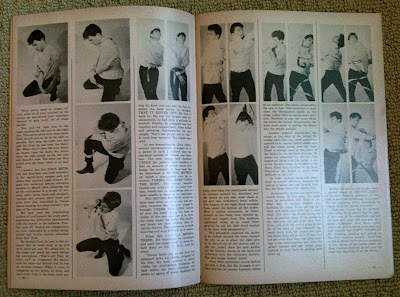 Unrelated to magic, but still interesting, is an advert in this issue announcing that "Don Post Studios has been chosen to be the official licensed manufacturer of producer character masks of The Munsters for commercial sale."