Russian Manacle and other Houdini rarities in Whittier

Houdini's famous "Russian Manacle" are among the items from the Society of American Magicians Hall of Fame and Museum currently on display at the Whittier Historical Society & Museum in Whittier, CA. The exhibition is called Behind Smoke and Mirrors: The History of Magic and Illusion and features an impressive display of rare Houdini artifacts.

The Houdini display -- which sits in a booth behind glass -- includes a dress worn by Bess, Houdini's die box, a brick from 278, signed photos, two original playbills and, most excitingly, three handcuff display boards created by Edward Saint in June 1936 (we know this because newspaper padding used in the boards bears this date). Two of the boards display authentic Houdini handcuffs and another is made up entirely of keys.

But what will be of most interest to Houdini fans is that affixed to one of the boards is the original Russian Manacle and key! This was a handcuff custom made by Houdini at the height of his Handcuff King career. Along with the Mirror and the French Letter Cuff, the Russian Manacle is probably the most famous and recognizable Houdini handcuff. There are several photos of Houdini in this cuff, and it's also featured on this famous poster. While handcuff collectors have crafted reproductions of the Russian Manacle over the years, this is the original. (Unfortunately, the museum does not allow photography, so I can't show it to you on display.) 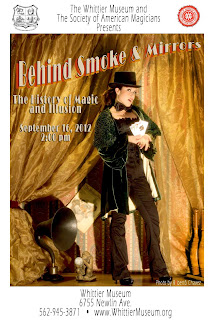 The Whittier Museum hosted a very well-attended opening reception on Sunday with a magic show by SAM members and refreshments. I was there along with fellow Houdini aficionados Mark Lyons, Joe Fox, Jay Leslie, Jeffery Abraham, Mike Castle, and Mark and Sheila Cannon. Mark was able to examine the boards closely and provided me the information about the newspaper padding. He also pointed out that the keyhole slide on the Russian Manacle is now missing, and that all the cuffs on the board had been painted silver at some point, probably by Edward Saint so they'd look better on display.

While the Houdini items are certainly a major draw, not to be ignored are some of the other amazing magic artifacts on display. These include T. Nelson Downs top hat, Cooke's own linking rings with carrying case, and Alexander Herrmann's original cups and balls. There are also some beautiful original Thurston posters and a faithful reproduction of his colorful Sawing a Woman in Half illusion.

The SAM collection was originally housed in the basement of a Hollywood bank and viewable only by invitation. But in December 2004, an underground electrical blast contaminated the building with toxic PCBs and all access to the collection was sealed as the SAM settled with the LADWP over the cost of decontamination. This is the first time the collection has been displayed since the accident and the first time it has even been opened to the general public.

Behind Smoke and Mirrors: The History of Magic and Illusion runs through July 13, 2013. The Whittier Museum is located at 6755 Newlin Avenue, Whittier, CA 90601. Admission is FREE.

For more information on the collection and upcoming special events, check out the SAM Hall of Fame Facebook page and the official website.

Okay, maybe I did sneak just one pic... 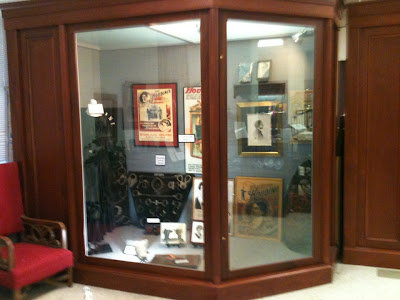