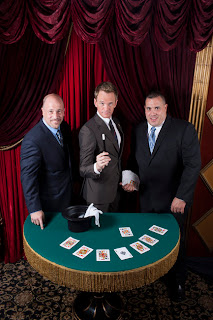 TANKED is back and bigger and better than ever with everyone – even huge celebrities – clamoring to get their hands on a one-of-a-kind piece of aquatic art from ATM (Acrylic Tank Manufacturing). Wayde King and Brett Raymer are brothers-in-law, business partners, best friends and rivals – together they head up family-owned ATM, the country's leading and most successful aquarium builder with state-of-the-art facilities in the heart of Sin City. There will be no shortage of blow-ups, would-be disasters and drama as the team heads out on the road for some of the biggest installs ever, for A-list clientele such Neil Patrick Harris and his Hollywood 'Magic Castle' coming up on Saturday, September 15, at 9 PM (ET/PT). A Houdini replica tank with an assortment of exotic fish will be in the spotlight on the castle's upcoming anniversary.

"The Magic Castle's 50th anniversary is right around the corner and we found the perfect way to celebrate -- with a custom built Houdini escape themed aquarium from Animal Planet's TANKED. Wayde and Brett created something so special and I know our members will cherish it for years to come." - Neil Patrick Harris, President, Academy of Magical Arts.

UPDATE: I've received permission to post a beautiful photo of the tank after the show aires on Saturday.