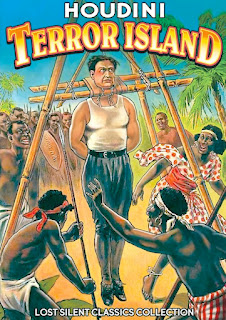 Alpha Video has released Houdini's 1920 silent feature, Terror Island, on DVD. This was the second and final film Houdini made for Famous Players-Lasky in Hollywood.

Alpha had previously released The Man From Beyond and Mystic Circle Murder on DVD. While these tend to be nothing special as far as the print is concerned -- I expect this is the same incomplete Library of Congress archival print -- Alpha does go the extra mile with cover art and menus. For Terror Island Alpha has used original artwork from a rare French color lithograph which sold in auction in 2005.

You can purchase Alpha Video's new Terror Island DVD from Amazon.com or Oldies.com.
Written by John Cox at 7:37 AM