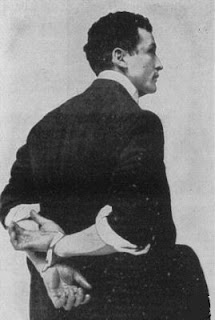 At the turn of the century a medium named Anna Rothe made a specialty out of producing various kinds of flowers for her sitters "from the fourth dimension of space." For this she was known as the "Flower Medium." In 1902 Rothe was arrested in Berlin, Germany. The book A Science for the Soul by Corinna Treitel, describes the episode:

In March 1902, two officers on the Berlin police force interrupted the medium Anna Rothe in the act of plucking first a hyacinth and then a narcissus flower out of thin air. They grabbed Rothe's hands, wrestled her to the ground, and whistled to bring several more policemen pouring into the room. As the other seance participants watched in horror, a female police assistant subjected Rothe to a physical examination that revealed 157 flowers as well as several oranges and lemons tucked under her petticoat. Placed under arrest and charged with fraud, Rothe spent most of the next year in jail awaiting trial.


When Rothe finally came up for trial, Houdini was playing his third month at the Berlin Wintergarten. While many TV documentaries and movies connect Houdini involvement with Spiritualism to his mother's death in 1913, the truth is Houdini's interest in spiritualism and spiritualistic trickery dates back to the beginnings of his interest in magic itself. Houdini was well aware of the Rothe episode, and in his Dramatic Mirror column for March 31, 1903, he writes:

Anna Rothe, the "Flower Medium" was found guilty of swindling and given eighteen months in prison, for swindling the public, although she had several well-known professors to testify that she was a real spiritualistic medium. This city is very rough on spiritualists, as you will know from the treatment of Anna Eva Fay, Doctor Slade, Schraps and many other well-known mediums, and it has been a sad blow to the cause of spiritualism as Ann Rothe was looked on as the prominent medium of the time. She is pretty well on in years, and she has been in jail ten months waiting trial, this time will be deducted from the original sentence, so she will have to serve only eight months. I saw the trial, and had to go at eight in the morning in order to get standing room. All the spiritualists in Germany tried to be there, but the court room in Moabit was to small to even hold a small percentage of the hundreds that tried to obtain admission. Although there were no prices charged, it cost me 10 marks to stand up.


Houdini's tone here is interesting. He certainly does not reveal his own skepticism toward Spiritualism. Indeed, with phrases such as "a sad blow to the cause of spiritualism", he almost sounds sympathetic.

The story of Anna Rothe, the Flower Medium, surprisingly did not find its way into Houdini's book, A Magician Among The Spirits. However, Houdini did mention attending the trail in a letter he wrote to Sir Arthur Conan Doyle when the two men were first beginning their friendship and discussions about spiritualism.

Coming next: The inescapable Loop the Loop.
Written by John Cox at 5:44 AM