Adventures in investing in Houdini 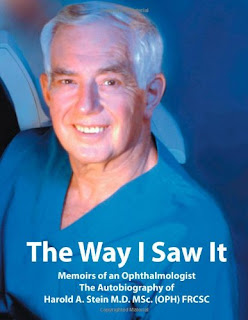 Dr. Harold A. Stein, one of Canada's leading ophthalmologists, has written an autobiography called, The Way I Saw It. Why is this of interest to Houdini fans? Because Dr. Stein was one of the original investing partners in the infamous Houdini Magical Hall of Fame in Niagara Falls, Canada, and he writes about the experience in his book.

Dr. Stein recalls how his friend Henry Muller learned from The New York Times that Joseph Dunninger was looking to sell his Houdini/magic collection. Stein and Muller flew to New York where the collection was being housed in various warehouse around the city.

"Dunninger's chauffeur picked us up at the airport and took us to his large home in New Jersey," recalls Dr. Stein. "There, Dunninger began to mesmerize us with all this magic. For me it was a most exciting event--not only to meet the great Dunninger, but also to have him display so many tricks from the world of Houdini. We were so enthusiastic that bought the whole collection sight unseen. The only competitor we had was a Las Vegas casino that was bidding on it."

Dr. Stein talks about opening day in which Dunninger entertained the assembled guests and media, and also some promotional stunts and the seances held at the museum over the years. He also recalls how the museum was destroyed by fire in 1995. However, Dr. Stein points out that, "We saved all the contents but the building was lost and a few years later Houdini's treasures were sold in an auction in California to the highest bidder."

I believe this is the first time I've ever heard anyone officially involved with the museum state that none of the Houdini artifacts were destroyed in the mysterious fire. News reports at the time stated that everything was destroyed. Maybe that was just media exaggeration, but I lived for years with the idea that the Houdini/Dunninger collection was gone until I started seeing items from the museum pop up for auction (like Houdini's head). Dr. Stein doesn't mention the Water Torture Cell -- which was destroyed -- but that was conveniently not part of the Dunninger collection.

Dr. Stein concludes, "The milk can that we paid $5000 for went for $100,000. It was an era when collectables were sought after and the real magic seems to be the return on our initial investment."

In the spirit of smart financial moves, know that you can read the Houdini museum section of The Way I Saw It via the free "Click to Look Inside" preview on Amazon.com and save yourself the steep $68 cost of the book.